I entered our Surrey Hills house and Lena's Permaculture Garden in the 2011 Boroondara Sustainability Awards.  Our house won the Sustainable Homes Gold Awards, and the garden got a Special Commendation.


My daughter Chloe and I accepted the awards from Mayor Heinz Kreutz at the Boroondara Council meeting tonight.

It was great to see so many inspiring house and garden projects in Boroondara. 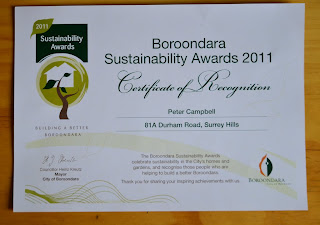 Posted by Peter Campbell at 11:01 pm No comments: Links to this post

In this submission "Car dooring" refers to the situation where a motorist opens their car door and a cyclist is forced to take evasive action or collides with the car door.

I am a regular commuting and recreational cyclist.

I have personally witnessed a "car dooring" in Auburn Road Hawthorn as a cyclist was approaching Riversdale Road travelling south. A motorist opened their car door without looking and a cyclist collided with it, just after the section where the on road bicycle lane finishes.

A colleague was also badly injured when his arm was severed by a car window after a car door was opened and he collided with it while riding his bicycle just outside Flinders Street station.

I recommend the following relating to "car dooring" incidents:

1. "Car dooring" should be an offence.

2. Liability for car dooring incidents should be assumed for the motorist opening the car door.

4. Mandatory reporting for all car dooring incidents should be brought in

5. Police should not have discretion to not charge motorists for car dooring offences

7. A car dooring incident should attract at least 6 demerit points for the licence holder.

The Victorian Government has a duty of care for the people of Victoria. It is important that strong measures be taken to reduce the incidence of "car dooring" by increasing penalties, more driver education about avoiding "car dooring" and by provision of bicycle routes and paths physically separated from other vehicle traffic.

This is my submission to the parliamentary inquiry into marriage equality.  You can access their online survey from [here]. Submissions close 20 April 2012

Marriage equality is a basic human right.  Discrimination against same sex couples should end. Same sex marriages should be allowed and have the same status as opposite sec marriages.

It is important to create the opportunity for marriage equality for people regardless of their sex, sexual orientation or gender identity.

Posted by Peter Campbell at 2:03 pm No comments: Links to this post

I visited the Tarkine for a 4 day bushwalk and was astounded by the regions natural and wilderness qualities.  I believe it should be protected by a National Park.

The coastal region of the Tarkine is one of the world’s great archaeological regions due to the richness and diversity of Aboriginal sites – many of which date back thousands of years.  I viewed hut sites, middens, petroglyphs and pebble causeways during my visit.

With respect to two iron ore mines proposed by Venture Minerals (project reference numbers 2012/6342 and 2012/6339), I draw your attention to the following concerns:

The two mines are proposed in areas that have been assessed by the Australian Heritage Council as being worthy of National Heritage listing. This listing should urgently be reinstated, and the proposals assessed accordingly.

The Tarkine is the second largest cool temperate rainforest left in the world and is home to more than 60 species of rare, threatened and endangered species, including the Tasmanian Devil and the largest freshwater lobster in the world.

These are two iron ore mines that would only operate for two years, but in that short time the values of the Tarkine could be irreversibly damaged.

Please take action to protect the Tarkine region as a National Park and prevent its destruction from mining.

Posted by Peter Campbell at 5:24 pm No comments: Links to this post

I was surprised to discover that a closing down sale at Fletcher Jones 2 weeks ago - an iconic Australian clothing company - was for the entire company.  My grandfather treasured his Fletcher Jones Covedene trousers.  I have an FJ suit and some work trousers I purchased two years ago.

I bought a jacket.  The last of its kind.

Fletcher Jones was a staff owned company that used to manufacture clothing locally in Warrnmabool and elsewhere in Victoria.  With companies and brands like this going down I wonder about the future of retail and manufacturing in Australia.

My local newsagent in Middle Camberwell shut its doors too.  Local shops such as this used to be part of the fabric of local communities.  Buy your paper and magazines, stop and have a chat, and buy some pencils and paper for your children.  Not any more.  The owner said he was working 80 hours a week and making no money from the shop.  "Everyone is paying bills and buying on the Internet" he said.  He is keeping the paper distribution round going though.

The Newsagency did not sell.  It just closed.  They used to be valuable businesses due to restrictions on licences.  Not any more.

Then a more recent arrival, the Larvatus Prodeo blog announced it was closing. I was quite active posting on this blog a couple of years ago and often found the interchanges interesting.   There were Labor acolytes and "defenders of the faith".  There were a few Wingnuts intent on flaming everbody and everything.  There were some very eloquent and sensible people.  There were some insufferable tedentious people carping on about trivia.  There were even a few hacks (government?) defending the indefensible - the logging of our native forests - and the use of phosphor weapons against civilians by Israel in Gaza.

I met some great people via the blog.  I think some discourse on the blog had major impacts during the 2007 and 2010 federal elections.   But it seems, all good things must come to an end.
Posted by Peter Campbell at 10:37 pm No comments: Links to this post

Email ThisBlogThis!Share to TwitterShare to FacebookShare to Pinterest
Labels: blogs, larvatus prodeo, the end of the world

My father Douglas Campbell and his brother John both mentioned they had an uncle named Peter Campbell who was a pilot who died in World War 2.   There is some talk that I was named after him.

I have had some difficulty tracking down information about him, but I have now had some success.

Here is his photo.  There is some resemblance to early photos of my father Douglas. 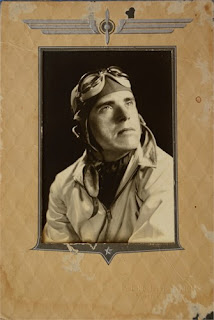 I located his death certificate from Colin Campbell, one of my father's cousins.  This specifies he died on 26 July 1942.  His RAF Sergeant number was 1100642.

The details were that he was "Accidentally killed when the glider of which he was the pilot under instruction crashed out of control own to structural failure." 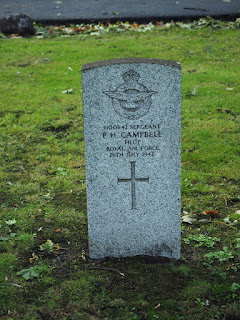 His death had a major impact in my family.  Seventy years later, his descendants still remember it.  This single death highlights to me the long ramifications that war and associated deaths have.

Posted by Peter Campbell at 10:45 am No comments: Links to this post

Huge demand for public transport in Melbourne and poor service

I have started work again in Melbourne's CBD.  The trains during "peak hours" are much busier than when I previously commuted regularly about 6 months ago.  It is great to see so many people using public transport, but the system is performing poorly.

The "stopping all station" trains along the Box Hill line used to go direct to Flinders Street, now all trains on the line go through the loop.  There are hundreds of people swapping trains (from Loop train to Flinder St and vice versa) for every train that arrives at Richmond.  This delays trains departing and obviously inconveniences many people.  There has to be a better way.

The Myki ticketing system is a debacle.  After costing around $1.2b (way over budget), and possibly up to $1.5b, it has critical performance issues that are impacting commuters, lots of bugs in the billing, and serious problems with the card readers.  The review commissioned by the Baillieu government has not been made public, but they have decided to throw good money after bad and try and make it work.

They are now decommissioning the Metcard readers and many stations and forcing commuters to use Myki, so the real issues and failings are becoming very obvious.

Here is a summary of issues I have encountered:

So how did this disaster happen?  It seems that Transport Minister Peter Batchelor in the previous Labor Government decided they would "develop a world class ticketing system that they could sell all around the world" and ignored the option of buying a system that was already available and working well (such as Brisbane's, or London's Oyster Card or Hong Kong's Octupus card).
Then the government awarded the contract to the lowest tender and the Kamco consortium that knew very little about ticketing systems.
Then Kamco bought cheap and inferior "end of life" reading devices and designed a system that has serious architectural points of failure.
Many of the problems with Myki were evident over a year ago, as I wrote in this post about Myki in February 2010.  I still think that the Myki experiment should be canned.  We should start again with a system that is proven and works, or stop issuing tickets or employ conductors again.  Governments should not engage in research and development for this type of infrastructure.  They should select systems that are proven, and conduct due diligence on companies and consortiums before awarding them contracts.
There is a whiff about this whole debacle that I just don't like.
Let's have the "open and transparent government" that you promised Premier Baillieu.  Please release the Myki review report, and tell me which of the issues I list are fixable.
To top matters off, the Auditor general calls for annual spending of $3 billion to cope with growing demand and fix problems due to chronic under funding.  Then Ian Dobbs, the new head of newly formed Public Transport Victoria, rejects the call for $30 billion and states that "The biggest opportunities are in making best use of what we've got at the moment, rather than believing that all the solutions are building, or buying new kit".
He, and members of our government, have obviously not traveled by public transport recently.  They probably never do.

I am riding by bike to and from work.  It is faster, more reliable and much more pleasant, even taking into account the traffic I have to negotiate.