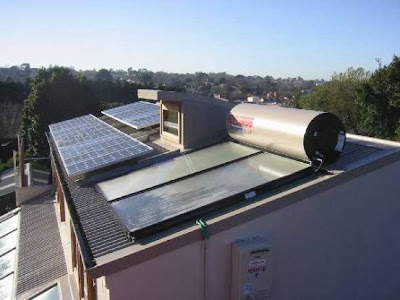 Our solar photovoltaic array at the rear. The solar hot water system is in front.

Here is a copy of a letter I have just sent to Peter Batchelor, the Victorian Minister for energy and resources, about the importance of introducing a feed in tariff for solar power in Victoria.

Feed in tariff legislation is in the process of being enacted in South Australia and Queensland. We need this in Victoria too..

If you have time, it would be worth sending in a letter of your own to your state politicians too.

TO: The Honourable Peter Batchelor

We have been operating a grid interactive solar photo voltaic array on our house in Surrey Hills since 2002, over which time we have saved approximately 15 tonnes of CO2 emissions. You can view details of the house and the solar system here.

We welcome the commitment of the Victorian state government to introduce a fair price for solar electricity generated on rooftops and fed into the electricity grid. We believe that a move toward renewable energy is an essential means of addressing climate change, and solar photovoltaic (PV) micro-generation has an important role to play in boosting Victoria’s renewable energy share.

By offering a premium price for electricity generated on rooftops and fed directly into the grid, feed-in tariffs recognise the wealth of benefits which arise from the adoption of this technology. These include:

However, for a feed-in tariff to create the level of take-up required to achieve these benefits, it is essential that it is paid at an adequate rate, for a long enough time, and on the total production of the solar system. I call on the government to mandate a feed-in tariff at:

A feed-in tariff set at this level will provide the necessary incentive for individuals to invest their personal finances into solar PV systems, safe in the knowledge that the price paid for electricity generated will adequately pay back this investment over the next 15 years.

Feed-in tariffs have been remarkably successful in over 40 countries internationally, and an adequate feed-in tariff in Victoria has the potential to build an industry in sustainable solutions to climate change, provide an alternative to polluting brown coal, and position the state as a leader in renewable energy in Australia.

Climate change is one of the greatest threats facing Victoria. I trust that you as the responsible minister (and the Premier and my local elected representative) take this issue seriously and ensure that this policy measure delivers a major expansion of renewable energy leading to real reductions in greenhouse gas pollution.

Can you please advise us whether you support introduction of a feed in tariff, and if so, when it will be introduced?

Posted by Peter Campbell at 1:18 pm No comments: Links to this post


Matters relating to the number of councillors

The population within Boroondara is likely to further increase as more medium-density housing becoming available. I therefore believe that an increase in total councillors from ten to eleven or twelve is warranted to cater for future population growth within the council area.

Based in the figure of 121,000 voters among the 154,450 people in Boroondara, twelve councillors would have approximately 10,000 voters per each, a figure that is in accord of other metropolitan municipalities.

I don’t believe that concerns expressed by the VEC regarding having an even number of councillors to a problem as the mayor could have a casting vote in the event a motion was supported by six councillors and opposed by the other six. In addition, the likelihood of such tied votes frequently occurring would be fairly low.

Matters relating to the electoral structure of the municipality

I believe that candidates elected by proportional representation to multi member wards would be more representative of voter’s choices. For example, 26 percent of voters in a ward with three candidates can elect a candidate, whereas in single member electorates 51 percent of votes are required after preferences. Proportional representation across multi-member wards throughout the Council area would therefore make it more likely that candidates with strong community support will be elected.

Multi-member electorates also give residents the opportunity to choose which of their ward councillors to interact with, and may provide more diversity of councillors (e.g. gender, ethnicity) to residents.

Single member electorates facilitate special interest groups (which may have significant financial resources) fielding several candidates and directing preferences to get their preferred candidate elected. Voters are often largely oblivious to such machinations and preference deals, so the allocation of their preference when voting may not reflect their intentions, largely due to lack of detailed information about candidates and a lack of understanding about the electoral process.

I believe the current ward boundaries in Boroondara are too small and not based on significant local demographics such as communities of interest. In addition, the largely arbitrary boundaries of the current small-area wards risk actually dividing local communities of interest. For example, many people within Boroondara would use and have views about Camberwell Junction and its infrastructure (such as public transport), yet the current ward boundaries place it within a single ward.

In addition, some of the current wards contain only small shopping centres while others contain larger ones that generate more traffic. I believe that larger wards encompassing greater diversity of facilities such as shopping centres, recreational facilities and public transport will provide better overall coverage of community interest in and concerns about these facilities.

The model I favour is four three-councillor wards with Camberwell Junction as the focal point. Each of these larger wards (North East, North West, South East and South West regions) would contain a mix of large and small shopping centres, numerous recreational facilities and a diversity of voters, ethnic groups and communities of interest. Camberwell Junction is a regional transport, shopping and services hub, so it is appropriate that all wards have an interest in its function, development and management.

Care should be taken to ensure that the South East area ward contains both the appropriate number of voters and area, as its outer boundary would be diagonal rather than rectangular. Alternatively, if this ward ended up smaller than the other three, its number of councillors could be reduced to from three to two.

While ordinal ward names may convenient, I suggest the following ward names would better reflect Council and community heritage. Information on the names was sourced from the Boroondara Council History of Ward Names.

I have been perplexed by successive Victorian governments fixation on building roads and freeways and not providing more rail transport. In this regard, the Brumby Labor government is no different from its predecessors.

It seems to me that that both the government and Vicroads have made incorrect assumptions that cars, trucks, roads and freeways will meet most of our transport needs now and for the future.

I wonder if they listen to the radio reports every morning of the congestion and delays on all freeways as increasing numbers of commuters try and get to work along "freeways" blocked with congestion by single occupant cars whose drivers obviously don't believe they have adequate public transport options available to them. 30-minute delays over the last 10 to 15 kilometres are common in the mornings, and very slow speed due to congestion are now chronic over similar distances in the afternoon and early evening.

The government must be aware of this very real problem, yet their answer seems to be "we need more freeways, tunnels and links" - as the Brumby governments terms of reference seem to suggest for the Eddington report - which seems to be focusing on reasons why building an east-west tunnel link between the Eastern and Tullamarine freeways should proceed.

I have just read recent reported comments by Transport Minister Lynn Kosky in this article, including:

The Government had just ordered 18 new six-carriage trains that would carry 14,500 more people during peak times — "equivalent to more than 12,000 cars and more than six freeway lanes of capacity".

So they do know that trains are much more efficient than cars for mass transit. They would also know that car transport produces around 8 times more carbon emissions (using dwindling oil reserves) compared with urban rail transport.

However, just buying more trains and trams will not solve the problem for those who don't have easy access to local rail tranport, as this map below illustrates.

Melbourne railways map
Source: http://en.wikipedia.org/wiki/Image:Melbourne_railways_map.gif
We don't have enough train lines. No new heavy rail lines to the suburbs have been built in Melbourne since the Glen Waverly line was completed in 1930, yet there has been massive population growth in south eastern, northern and western suburbs. Whole new suburbs and regions exist with no access to rail transport. No new significant rail lines are planned in Melbourne.

Those that have been planned, and even committed to in the past, such as the Doncaster and Rowville lines, are apparently on hold or shelved. Recent plans to extend the Epping Line to the new sustainable suburb of Aurora have not been delivered.

During this time, freeway constructions include:
Several interchanges have also been upgraded at great cost. This list is not comprehensive, but it does make clear that activity and funding for roads and freeways has greatly exceeded that for rail over the last seventy years.

Over recent times the government has chosen to spend money on large projects such as the Southern Cross station upgrade, on ticketing systems that don't work properly, and on employing ticket inspectors, none of which have actually provided better, more frequented integrated public transport. One has to question these priorities.

Here are my suggestions for getting urban transport solutions back on track:
Like most of the challenges that confront us in the 21st century, it seems the solutions are already available for moving towards sustainable living, but the political will to embrace them is lacking.

As oil reserves diminish our very expensive freeway system could at least end up providing fast and efficient bicycle transport!

Posted by Peter Campbell at 9:45 am 5 comments: Links to this post