I went for a local ride through Wattle Park with my daughter on Wednesday afternoon 15 Sep 21 at 4pm.  A hole was dug out of the track and sticks placed in it, I slowed down as I went around it.
Then I came to  to a small log jump that I have gone over many times.
I went over the log at about 10km/h ready for the flat landing but a 1m wide deep hole had been dug behind the log. This hole was not visible on the approach.
After going over the log my front wheel dropped into the hole and I went over the handlebars, I landed on my head and right wrist and was injured.
I walked up to the carpark where my wife picked me up and drove to hospital.
A cat scan showed I have a fracture in my T3 vertebrae luckily not near the spinal cord.
An x-ray showed a serious fracture of my right metacarpal bone that required surgery and a wire to stabilise.
I was lucky - landing on my head could have damaged my spinal chord resulting in death or quadriplegia
This extremely dangerous track modification could have resulted in death or permanent injury. There has been at least one other crash there. It has been reported to police and Parks Victoria who will remove the hazards.
Be careful during lockdown, watch out for obstacles and dangerous behaviour. Don't do things that endanger others. 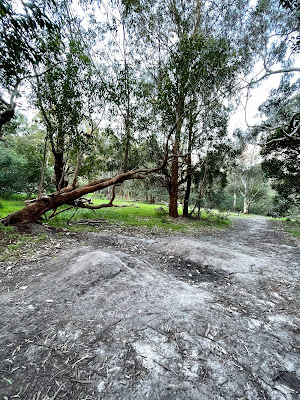 Posted by Peter Campbell at 12:51 pm No comments:

Australian federal election 2021-22 - consider who you vote for

The next federal election in Australia is approaching. The date is not set - it will be called at the discretion of Scott Morrison, the incumbent Prime Minister and leader of the Liberal - National Party Coalition government. He will do this when he thinks he has the best chance of winning.

When will the election be held?

The first date for a normal house and half-Senate election was 7 August 2021 but that date has passed.

The last date for a normal house and half-Senate election is 21 May 2022. This date gives six weeks to complete the complex Senate count and allows Senators to be declared elected and start their terms on 1 July 2022. A mid-May election would be announced in early April 2022.

See: When can the Next Federal Election be Held? – Antony Green's Election Blog

It is likely the election will be in either March, April or May 2022

Strengths - issues they will attempt to campaign on.

Attacks - on other parties and candidates.

Weaknesses - they will attempt to protect against

Some things to consider when voting

This upcoming election will have a huge impact on Australia's and the world's future. Use your vote wisely.
Defense: https://twitter.com/workingdogprod/status/902855541143117825?s=20

Posted by Peter Campbell at 9:32 am No comments:

Some links on COVID-19 Delta and children

Posted by Peter Campbell at 2:53 pm No comments:

I am a resident of Surrey Hills in Melbourne. We renovated our house in 2001 to improve its energy efficiency and we added solar panels and a battery system. I feel very strongly that climate change must be tackled as the primary threat confronting our country and a safe climate across Earth.

The Climate Change 2020 Bill put forward by Zali Steggall is a genuine attempt to break the political deadlock that has thwarted meaningful action to tackle climate change in Australia across 3 decades.

The Bill is an authentic proposal to build a legal and policy framework for national action on climate and energy policy.The bill proposes to legislate a national net zero emissions target by 2050 and set five yearly emissions budgets and emissions reduction plans, consistent with limiting global warming to well below 2 degrees and pursuing efforts to limit warming to 1.5 degrees Celsius.

The guiding principles for decision makers in the Bill will ensure decisions are efficient, effective and equitable, informed, risk-based and integrated and fiscally responsible.

In addition, provision is made in the Bill for fair employment transition for workers, industries or regions affected, community engagement and self-determination, and national and international cooperation.

I support this Bill for the following reasons:

I respectfully request that the Climate Change (National Framework for Adaptation and Mitigation) Bill 2020 be endorsed by the Australian Parliament.

In Switzerland, they are holding referendums right now. These have been mostly initiated by citizens.

Two are federal, 6 are canton level, and in Geneva there are two commune ones, bringing the total to ten.

One Canton referendum caught my attention. The proposal is to offer rebates to people who buy new cars with better than 120 g CO2/km, no effect on those in the range 120 to 250, and an extra levy to those that produce greater than 250.

How refreshing it would be to vote for a referendum such as this - that has potential to provide real incentives for people to reduce their carbon emissions.

Currently in Australia, such a referendum is impossible. For healthy democracy I think we need the ability to hold referendums like this now.

So we need a referendum to change the Australian Constitution to make citizen-initiated referendums possible.

Some photos of billboards for the referendums 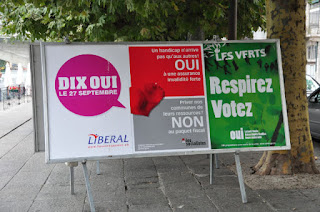 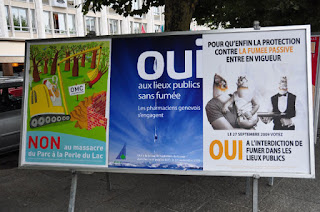 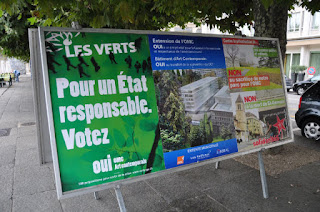 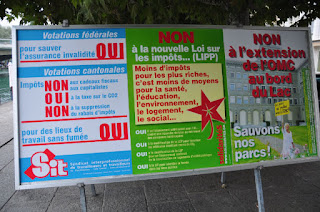 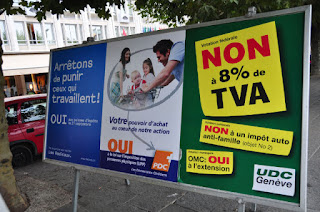 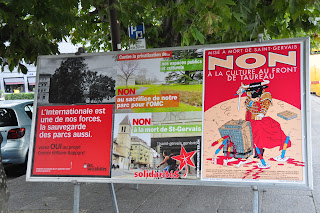 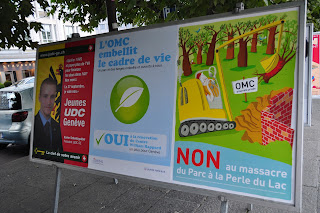 Posted by Peter Campbell at 10:38 am No comments:

The current independent review of the Environment Protection and Biodiversity Conservation Act (EPBC Act) released its interim report in July 2020, with the final report due in October.

The interim report found that Australia’s environment is in an unsustainable state of decline and recommends a full suite of reforms to turn this around, including national environmental standards to protect wildlife and ecosystems, an independent watchdog to enforce the law and proper community participation in and oversight of the decisions governments make.

But the Morrison Government is this week rushing a bill before Parliament that would hand environmental protections over to the states before the independent review is finished and without strong assurance safeguards in place.

The Morrison Government has also rejected calls for an independent watchdog, despite a recent Auditor-General report outlining ongoing, systemic failures by the Environment Department to enforce the laws and manage conflicts of interest.

Any amendments to the EPBC Act brought to Parliament to facilitate bilateral approval agreements with State Governments should be treated with scepticism. Without vital safeguards in place, the Government’s bill represents a hasty and thoughtless devolvement of Commonwealth powers and responsibilities to states and local governments that are often the proponents of regulated projects.

Right now, there's been no consideration of its contents and implications, and the process is rushed and hasty - it’s time to slow down and get it right.

I ask you and your Senate colleagues to:

In a country still reeling from the ecological catastrophe of the 2019-20 bushfires, we need national leadership to safeguard the ecosystems that support us, build resilience in the face of climate change, support communities to recover and protect our globally important wildlife.

You have the power to ensure our precious wildlife and forests don’t go the way of the Tasmanian Tiger. We need your leadership now.

(address supplied)
Posted by Peter Campbell at 3:28 pm No comments:

This is an example of how incredibly infections the coranavirus that causes COVID-19 disease is.

A worker in a Dandenong factory contracted the disease at work, he commuted to a medium size town in Gippsland daily.  The infection spread to his teenage children before any symptoms were visible.

The children travelled to school on a school bus shared by three secondary schools in or near the town.

Students and teachers at all schools subequently tested positive for COVID-19 - the schools were then closed and deep cleaned, along with the buses.

Contract tracing and isolation contained this outbreak that started from one person.

The virus can spread easily in a confined space with people - such as a bus, classroom, dinner party, family meal or church service - without anybody showing symptoms.  It can spread by aerosol (tiny droplets suspended in the air) and people just breathing that air.  Coughs and sneezes are not required to spread it (unlike the flu).

Lockdowns are vitally important to drive large case numbers and resultant deaths down.

Social distance and masks are vitally important to stop it spreading.

State and federal Liberal MPs continually attacking Dan Andrews and the public health response measures in Victoria are compromising efforts to contain the pandemic and putting lives at risk.

This is not the time for petty politics.

Politically motivated attacks on the considerable efforts by contact tracing teams and health care workers in Victoria is causing them distress and also angering the Victorian community.

If Australia had similar public health response measures to the United States, United Kingdom and Sweden we would have over 12,500 more deaths.

Posted by Peter Campbell at 10:19 am No comments: