Woodchips and water do not mix 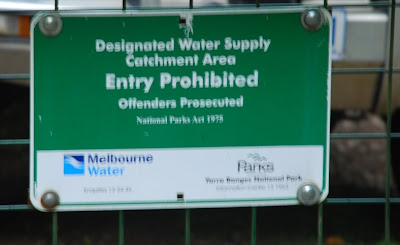 Sign stating Armstrong Creek catchment is protected
I visited the Armstrong Creek water catchment near Cambarville on the road from Warbuton to Marysville in February this year to go for a short walk in the uninhabited Mountain Ash forest.

A sign on the gate leading into the catchment read “Designated Water Supply Catchment Area, Entry Prohibited, Offenders Prosecuted”. A representative from Melbourne Water sitting in a car behind the locked gate informed me that I was not allowed to enter. I asked him why access was denied to me when further down the track loggers with their trucks, bulldozers and chainsaws were busy clear felling forest within the catchment . He refused to answer my question.

Few people in Melbourne realise that their water catchments are being logged. When they find out they are surprised and concerned, especially when they learn that this logging is decreasing both the quality and quantity of water they provide to Melbourne.

Around 12% of the Melbourne's total forest catchment is available for logging and 340 hectares can be harvested each year. Clear felling occurs in five catchments which supply approximately 40% of Melbourne’s water needs.

It is a paradox that we can be arrested and fined for entering our closed water catchments but loggers have free rein to clear fell sections of them.

In May 2002, the Victorian Government released the “21st Century Melbourne: a WaterSmart City” report. The vast majority of public submissions for this study favoured stopping logging in all water supply catchment areas. The report contained a recommendation to “conduct a detailed and comprehensive investigation into the feasibility of establishing plantations to allow for the phasing out of logging in Melbourne’s water supply catchments”. The report further stated that “if plantation alternatives are confirmed feasible, an implementation plan to phase out logging from within the catchments should be prepared”.

Potential water savings from the gradual phasing out of logging in the Thomson catchment alone by 2020 were estimated in the report to provide an additional 20 gigalitres (20,000 ML) per year of water in 2050.

In June 2004, the government released another report titled “Securing Our Water Future Together” which stated that “Melbourne’s original water catchments are closed catchments, are managed as national parks and that logging will continue to be banned in those catchment areas”. This report also found that “improved water yields within catchments supplying water to Melbourne are important in securing Melbourne’s water supplies”. Actions identified for government included developing options to phase out logging in the water catchment areas, transition the wood supply to plantations, and assess the social and environmental benefits and costs of these options.

Fast forward to 2008 and our water catchments are still being logged, even though Melbourne's rainfall and dam levels have declined to historically low levels. Climate change has reduced autumn rainfall into water catchments by 40% across Victoria since 1950. 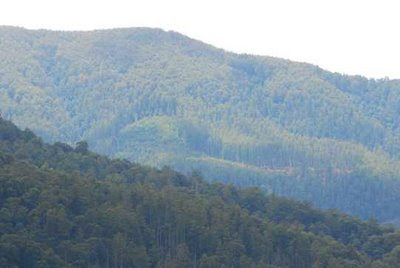 Logging in Armstrong Creek catchment, visible from Reefton Spur Rd
In April this year, after four years of delays and inaction, the government finally commenced meetings with stakeholders as part of the government’s Wood and Water Sustainability Assessment Project, which is supposed to address the actions identified in the 2002 and 2004 reports. I attended the first stakeholder meeting representing Environment East Gippsland.

However, during the meeting it became apparent that the government has no real intention of stopping logging in water catchments. The promised government reports on timber substitution and water studies were not available to us, even though they were specified as key inputs for the “sustainability assessment”.

Then the following bombshells were dropped:

All the environment groups present, including the Wilderness Society, the Australian Conservation Foundation and the Central Highlands Alliance, stressed that community expectations were for logging in Melbourne's water catchments to cease by 2010. In support of this, twelve councils in greater Melbourne have now passed motions to stop logging in our water catchments.

However, we were informed that the 2010 exit option would be "assessed but not presented to government". I stated that this option must be properly considered as it would be the best outcome for our water supplies, and that we were not prepared to further participate in the consultation process with it excluded.

Unfortunately, the government has refused to act on our requests for the process to be improved in line with community expectations, so all environment groups except for one have now withdrawn from the Stakeholder Reference Group in protest.

We are greatly concerned that the government continues to favour sections of the logging and woodchip industry over protecting water supplies for Melbourne residents, even though over 80 per cent of the forest logged ends up as wood chips.

It appears the government is preparing to make an announcement in the run up to the next Victorian election that it will “protect our water catchments”, but only after the remaining high quality forests in them have been logged, and Melbourne's water supplies further reduced.

Protecting our water catchments from logging, combined with measures such as installing household water tanks and more recycling, could even negate the need for the proposed expensive and energy-hungry desalination plant and the pipeline from the water-starved Goulburn river.

Posted by Peter Campbell at 11:42 pm 11 comments: Links to this post