I watch the final weeks of the U.S. presidential campaign with interest.  Many called it to be a close race, with Obama's chances reduced to high unemployment and having a hostile Republic-dominated Congress blocking many of his initiatives and much of his legislation.

The Mitt Romney suffered from the secret video recording of him declaring that "47% of Americans are sponging off the welfare system".  He couldn't really refute it as those were his words.  I really wonder if he and most Republicans believe this to be the case.  Many people in the United States do it very hard if they don't have a job.  When the "unemployment insurance" they have banked while employed runs out, that's it, they get no more money.

When Hurricane Sandy hit everything changed.  Obama paid close attention to emergency and relief efforts.  He also put significant funding into the Federal Emergency Management Agency - the main government agency that provided emergency services to the tens of thousands of affected people.  Romney was on record stating that this funding should be reduced.

Climate change was the elephant in the room during the presidential campaign.  Neither Romney nor Obama spoke about during their debates or elsewhere.  Yet climate scientists have clearly attributed the increased ferocity of Hurricane Sandy to climate change.  The other topic not mentioned during the campaign was forest protection, despite ongoing logging of old growth forests in the United States.  In general, policies for environment protection were not really covered at all.

When the election results came in, a strong result for Obama was obvious fairly early on, despite the shrill protestations of Karl Rove on Fox, who had something resembling a meltdown when the trend showed clearly towards Obama.

Obama claimed victory on Twitter - a first for a Presidential campaign. 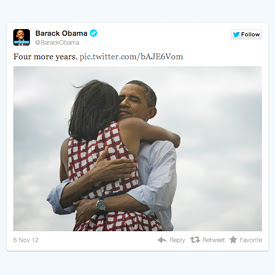 Watching the campaign, it seems that politics is now the new religion.

Many people follow a political party and its leader as a matter of faith.  For example, many Republicans believe in their policy positions as a matter of doctrine, such as no abortions (the "right to life"), small government and reduced taxes (despite George W Bush as president increasing both) and undertones of "white superiority" with mutterings about "getting tough on immigration".

On the other hand, many Democrats would believe they have progressive policies on climate change (despite the emissions trading or a carbon tax being abandoned), foreign affairs (despite the ongoing un-winnable war in Afghanistan and ongoing drone attacks that kill civilians) the environment (despite ongoing forest destruction and Americans still driving around millions of massive cars) and human rights (despite Guantanomo Bay still not being closed).

Many people polarise around these two positions - and both sides believe they are "right" and the others are "wrong".

Obama won the big majority of Electoral College votes that mattered (in the Swing States) and therefore comfortably won the presidency.

The Democrats won the Senate again, assisted by a couple of Republican Senators that made telling remarks during the campaign:

The comments indicate how beliefs and dogma are entrenched within political ideology - akin to or even linked to religious beliefs.

The Republicans however retained control of Congress.  So the end result of the election was a situation identical to how it was before - Obama as President, a Democrat controlled Senate and a Republican controlled Congress.  So it seems more political deadlocks and bickering will ensue.

After the election, partly lost by the Tea Party dragging Republican policy to the far right, Tea Party people insisted that they lost "because Romney didn't stay true to their hard right fixed policy positions on taxation and strayed too far to the left".  The opposite appears to be the case.

Obama ran a more inclusive campaign and picked up strong support among the Latino, Black and Gay communities.

However, in the final result Obama won 50.8% of the primary vote against Romney's 47.5%

So it really is a divided country, with both sides holding positions, much of which are grounded in dogma, that are somewhat opposed to each other.

Obama's team ran a very good on the ground campaign and mobilised lots of people.  But these same people have little or no influence on how political policies and legislation will not proceed.

Democracy is now all about the prize (winning the Presidency and the Government) rather than the process of representing people and consulting with them to shape and implement policies.

Posted by Peter Campbell at 10:54 pm No comments: Links to this post

Email ThisBlogThis!Share to TwitterShare to FacebookShare to Pinterest
Labels: 2012 U.S. Election, obama, politics, the end of the world, Twitter

The Australian Government has dropped its ill-fated attempt to implement a "mandatory Internet filter" or  "clean feed".

It is not really clear where the intention to do this came from.  It seems to be an initiative conjured up during Kevin Rudd's time as Prime Minister, perhaps resulting from some background influence of the Australian Christian Lobby.

Stephen Conroy, the Communications Minister, continued to try and sell the initiative even though it was clear he didn't really know what he was talking about.  He was unable to address simple questions like:


This half-baked and ineffective measure would have resulted in censorship of the Internet, somewhat like the Great Firewall of China that the Communist Party administers.

Instead, an Interpol process will be used that will have a more rigorous process for deciding what sites are to be blocked.

Its good to see that some sense has prevailed with the outcome here.

Posted by Peter Campbell at 9:25 pm No comments: Links to this post

Dear Prime Minister, Environmental laws safeguard our way of life. They protect our land and wildlife, and ensure that our air and water are not polluted by destructive development.

I am deeply concerned that under pressure from industry, federal and state governments have recently announced an aggressive plan to wind back critical environmental protection laws that protect our land, water and wildlife.

History has shown us that the Federal government has a critical role in protecting matters of national environmental significance, which it must not abdicate.

Short-sighted development proposals, supported by the states, have threatened Australia’s natural heritage many times in the past. The federal government has had to step in to prevent irreversible harm to our iconic landscapes and wildlife.

A healthy environment is essential to the Australian way of life. Due to unrestrained development our environmental assets are in a state of decline, we need stronger environmental laws not weaker ones.

I call on you to reject the proposals laid out in the Council of Australian Governments (COAG) agenda that would fast-track the transfer of federal approval powers to state governments, wind back the Environmental Protection Biodiversity and Conservation Act and allow states and territories to fast-track major development projects.

Posted by Peter Campbell at 4:47 pm No comments: Links to this post

I am writing to urgently draw your attention to research which has just been release by Southern Cross University. The research shows massive leakages from the ground occurring around Tara in Queensland where coal seam gas mining is underway.

If these results are verified it could mean that coal seam gas is worse for climate change than coal.

Please take the following urgent actions in the interests of Australia's farms, environment and climate:
Your Sincerely,

Posted by Peter Campbell at 2:57 pm No comments: Links to this post