Tropical cyclone Yasi is bearing down on far north Queensland.  The forecast predictions are for conditions that may be the worst (strongest) ever cyclone to impact Australia.  The cyclone has been upgraded to Level 5  - the  highest.

My thoughts are with FNQ friends.  Stay safe folks.

Here are some selected forecast diagrams and charts, all derived from the Australian Bureau of Meteorology unless otherwise credited. 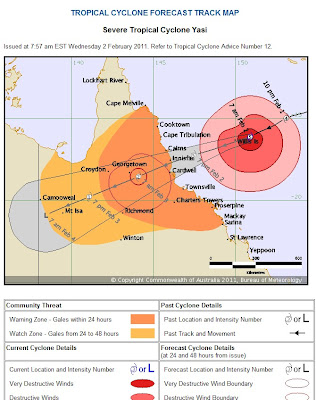 This is another example of an extreme weather event - of which scientists such as Graeme Pearman (ex CSIRO), Barrie Pittock (ex CSIRO) and David Karoly (University of Melbourne) have been warning will increase in both frequency and severity, due to climate change.
This is more evidence that we need a fund for addressing the catastrophic effects of climate change - such as floods, bushfires and cyclones, rather than just a one year "flood levy" just announced by Australian Prime Minister Julia Gillard.

Posted by Peter Campbell at 10:46 am 2 comments: Links to this post