A tale of two newspapers

Reza Barati, an Iranian asylum seeker incarcerated at the Manus Island "offshore processing centre" in Australia's care was murdered by security guards on Thursday 20 February. The Age (Melbourne) put this story on its front page with further information inside on page 2. 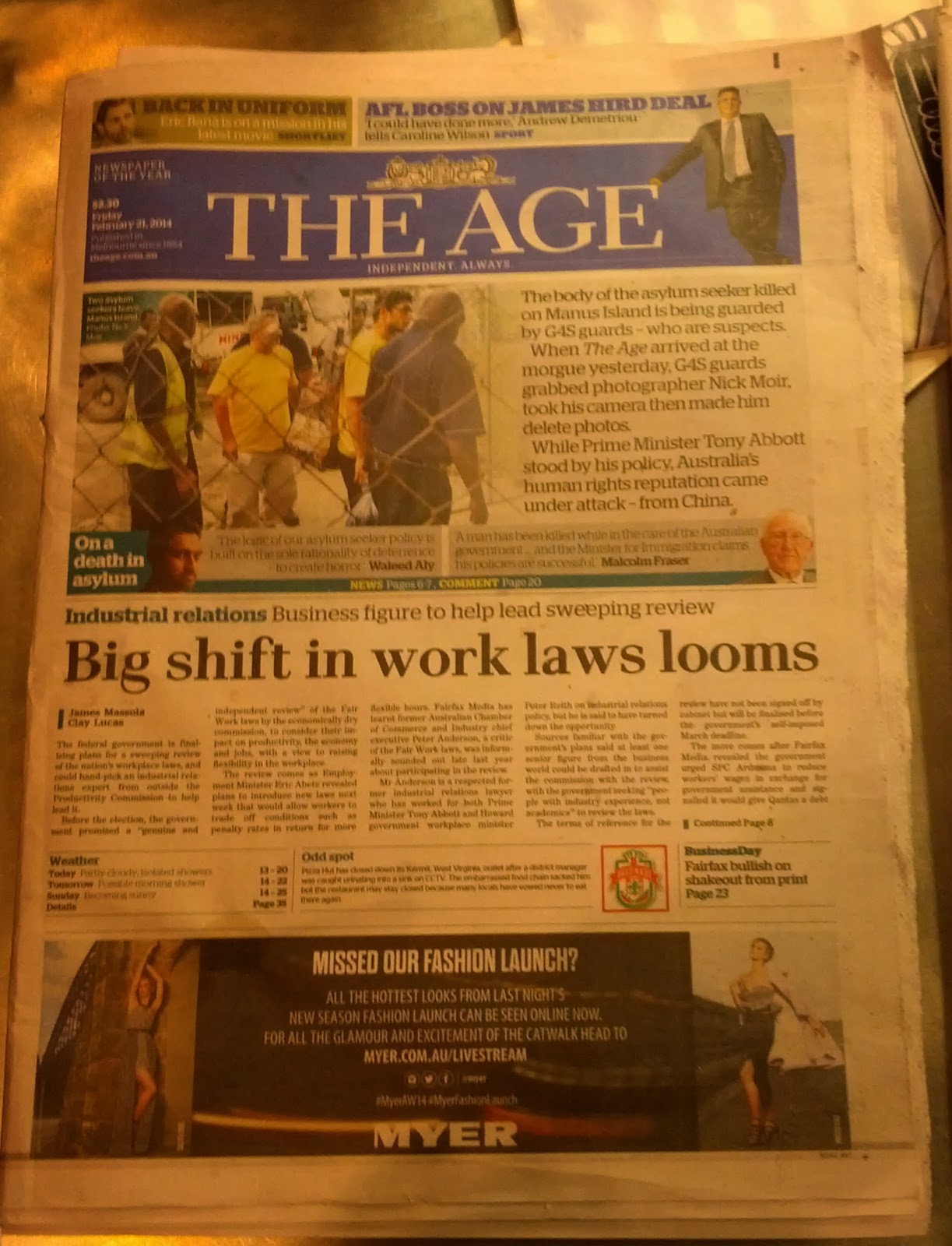 In the Herald Sun (Melbourne), the same story appears for the first time on page 15, with very little information provided.  A leggy model and a local murder is featured on its front page. 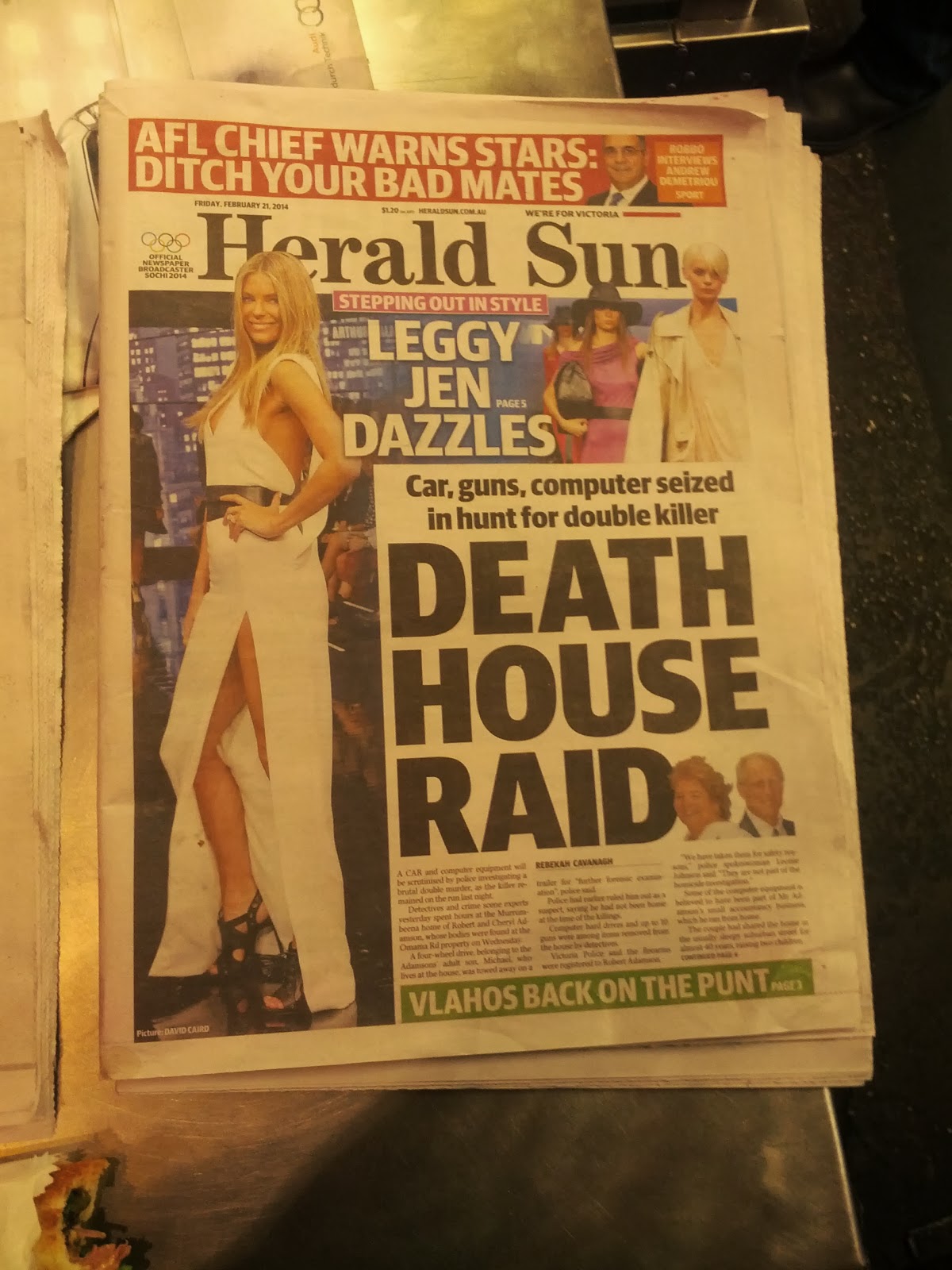 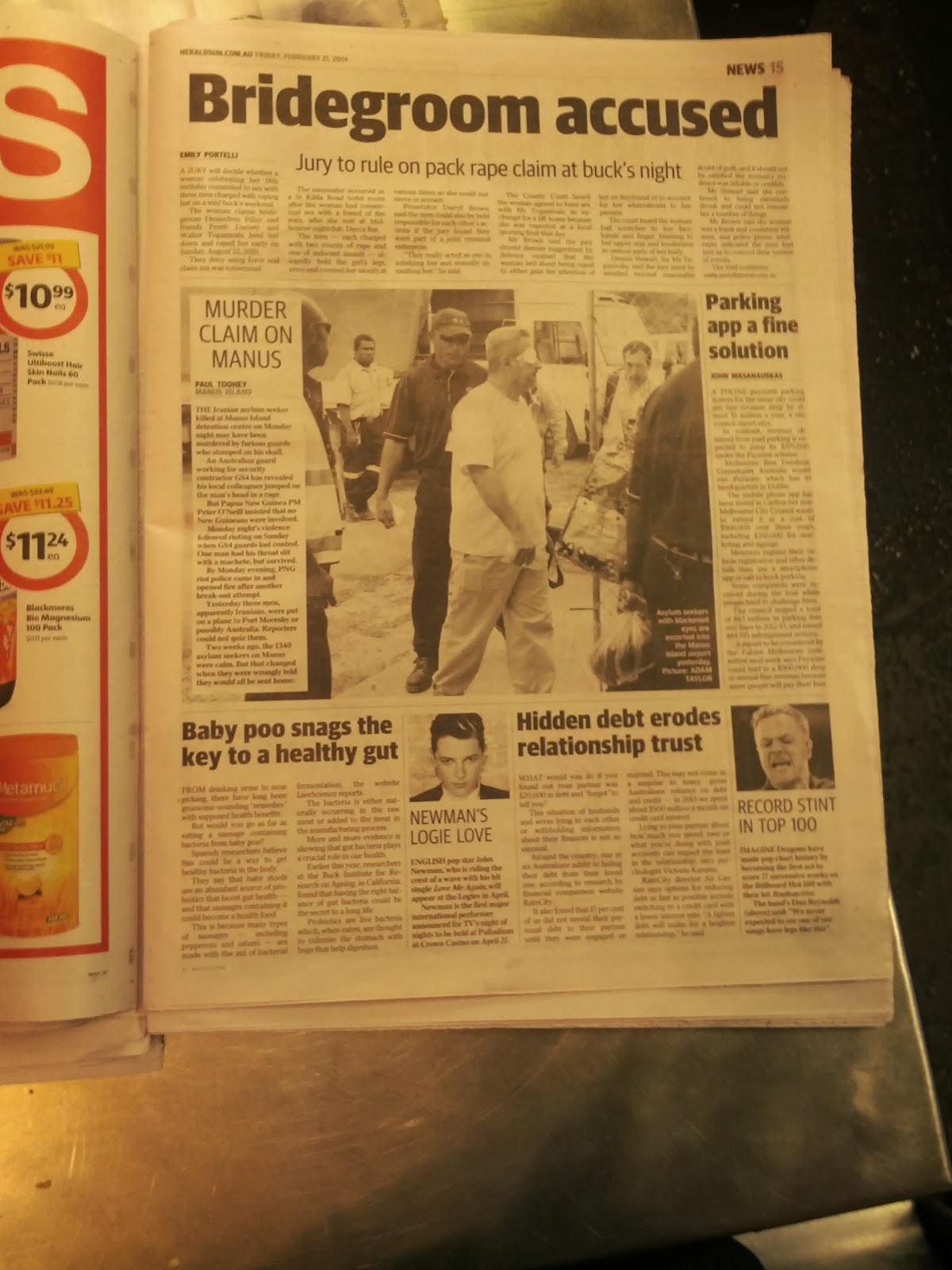 It is interesting that Herald Sun editorials and some journalist recently stridently attacked the ABC for "alleged bias against the LNP government" supporting claims to that effect made by Prime Minister Tony Abbott.

How do these people lie straight in bed?

The extremely biased Murdoch press and Tony Abbott attack the ABC when they report both sides of a story (such as allegations that Navy personally deliberately inflicted burns on asylum seekers in a boat they were turning back to Indonesia).

Mr Abbott, we need a Royal Commission into the Navy hand burning allegations, and into the Australian Navy's repeated incursions into Indonesian waters!

Sorry, I forgot, Royal Commissions are only held as witch hunts to score points against the Opposition (e.g. home insulation and union corruption).

These are dark days for Australia.  Our international reputation is being trashed by the Abbott government's human rights abuses against asylum seekers, and Abbott's often repeated lie that is "illegal to seek asylum in Australia" when it is not. 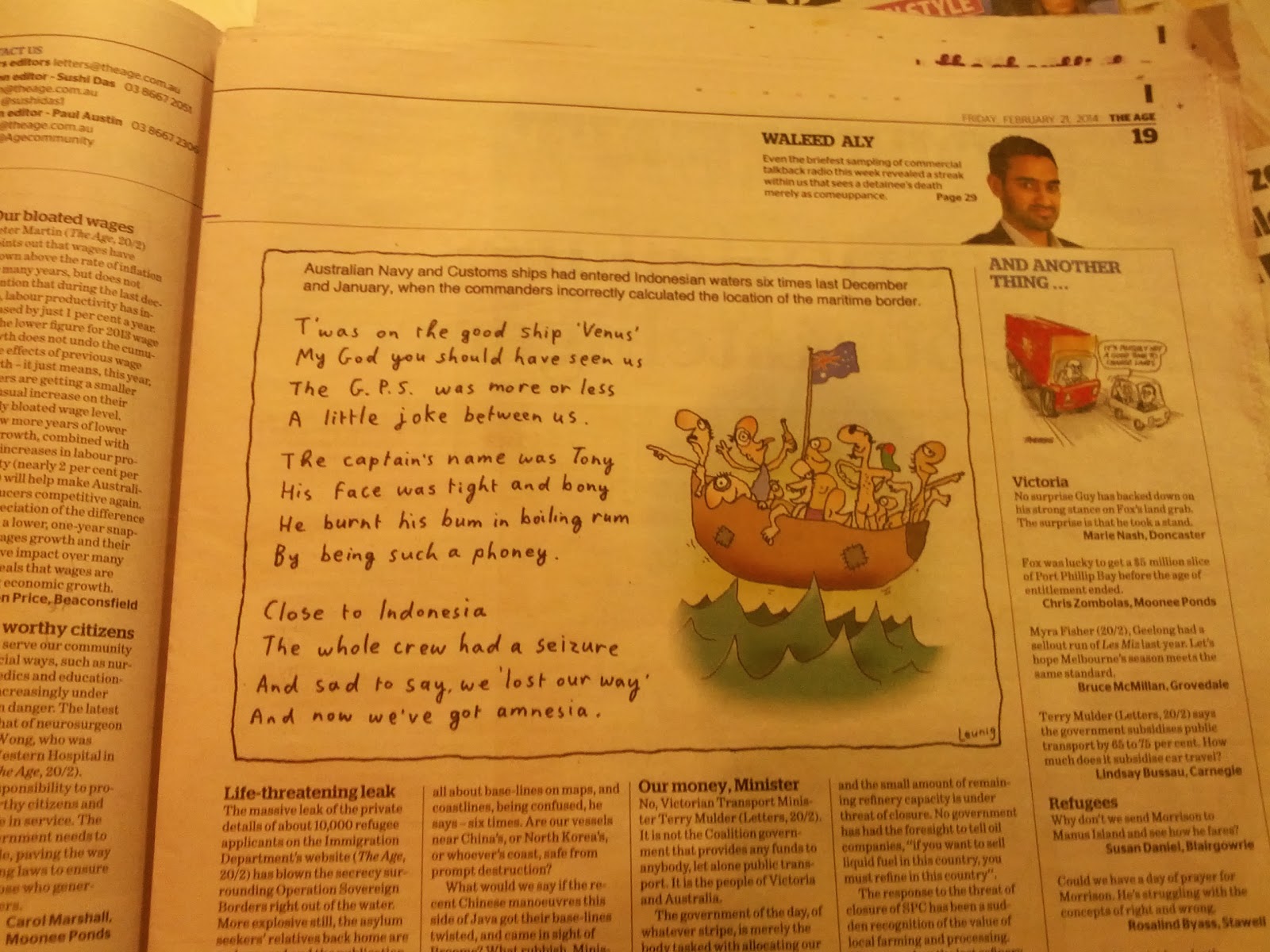 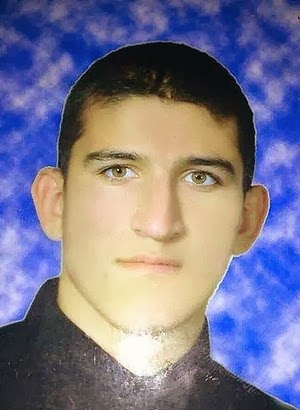 Posted by Peter Campbell at 8:01 pm No comments: Links to this post

I have sent this open letter to every Member of Parliament in Victoria.

I will add a list of who responds to the bottom of this page.

Dear  [ Victorian State MP ]
This route is supported by the Boroondara Council. Andrew McIntosh (MP for Kew) and Robert Clark (MP for Box Hill) have both advised me that they support the route proposal in meetings I have had with them.

A detailed proposal for this route was first issued in 1996. Since then, virtually nothing has happened.

The latest draft of VicRoads Principal Bicycle Network (PBN) has a section of the route from Box Hill to East Camberwell marked as a primary cycle route, yet nothing has happened to realise this.

There is now a proposal to build a 4th rail line along the Box Hill line easement within a 10 to 20+ year time frame. The rail easement land available for this has been unused for decades, much of it grows weeds.


A recent Department of Transport study found that the financial payback period for bicycle paths is under 10 years.

There is therefore a compelling case to build the Hawthorn to Box Hill trail along the Box Hill line rail easement and then rebuild it if and when the 4th line is constructed.

There is currently no safe east west cycle route through Boroondara.

Cyclists travelling east west through the centre of the City of Boroondara either use back streets (and cross very busy roads such as Bourke Road, Glenferrie Road and Power Street) or they use roads that carry very heavy traffic such as:

Bike lanes vs bike paths
Transport planners in VicRoads and local governments are implementing and promoting marked bicycle lanes on many major and minor roads. However, such routes are not a substitute for dedicated bike/pedestrian trails, as evidenced by the very high bicycle and pedestrian usage of routes such as the Gardiners Creek Trail and Main Yarra Trail.

My concerns with bike lanes marked on roads are:
The TAC costs associated with numerous bicycle-car crashes in this region could amount to millions of dollars over a 10 year period, and there have also been deaths. This money would be better spent preventing collisions, injuries and deaths by providing safe cycle routes separated from cars and trucks.

In summary, I suggest that funds be immediately allocated for the planning and construction of the Hawthorn to Box Hill Trail, using land in the Box Hill line railway easement where possible.

My questions to you are:

Posted by Peter Campbell at 11:29 pm 6 comments: Links to this post