In Perth, they have great cycle paths and new railway lines

I visited Perth for a short stay in July, and have been pleasantly surprised by the great network of bicycle paths around the city. While cars are a very popular mode of transport, the bicycle is not neglected here. 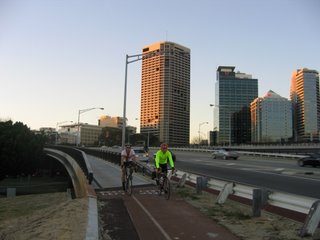 Here is a bike path close to downtown Perth.
A new railway line is also under construction from downtown Perth to Mandurah to the south on the coast. This is an impressive undertaking with tunnels under the central business district.
This is contrast with Melbourne where no new railway lines to the suburbs have been built for decades, and many bicycle routes consist of lines painted on the road, which don't really provide adequate protection from cars. Most people just don't feel safe riding bicyles on busy suburban roads. 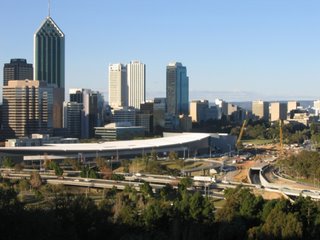 With oil just hitting US$80 a barrel, I find it astounding that our governments are still basically fixated on cars and trucks as our primary mode of transport. It is great to see a more sensible approach in Western Australia. Bicycles would have to be the most environmentally friendly mode of urban transport, with rail coming second.

So, Greenprint suggestion #1 is to create a dedicated cycle path network to make bicycles a safe and convenient mode of transport. We need legislation that mandates the creation of bicycle paths along all metropolitan railway easements. We need bicycle paths so that people can safely use bicycles through our suburbs.

With Australian crude oil reserves running out by 2011, urgent action is needed on sustainable transport options. Our State and Federal governments mostly have their collective heads in buckets of asphalt. Send your local member a letter and ask them to lift their game.
Posted by Peter Campbell at 11:56 am No comments: