I strongly opposed the proposed amendments to section 18C the Racial Discrimination Act 1975.

The safeguards provided by the Racial Discrimination Act have been in place for almost 20 years, including during the 11 years of the Howard government, giving targets of hate speech a peaceful and legal avenue of redress.

These laws have helped resolve hundreds of cases that would otherwise have been left to fester and to degrade social cohesion.

These laws protect all Australians against racial vilification, not only minority groups, and are one of the few inhibitors we possess against the racism which underpins many overseas conflicts.

I believe that the proposed changes, if passed, will send a dangerous signal that hate speech is sanctioned as a form of freedom of speech, that bigotry has a place in our society.

I do not believe that it is OK in our society to behave or speak like a bigot.

The proposed amendments will encourage those so inclined to take bigotry into the public domain. Even in situations of unambiguous abuse, the victim will be required to prove that the abuse may incite a third party to racial hatred – an extremely difficult test to satisfy.

Those who bring diversity to our country will be more susceptible to racist taunts aimed at their culture, their tradition, their faith, their skin colour. They will be rendered vulnerable to hate speech.  Their protection against this will be compromised.

Our government has a duty to make racism socially unacceptable and to provide the targets of racism with a legal course of action. The proposed changes will take our society in the opposite direction.

I along with over 200 ethnic communities across Australia, including indigenous Australians, oppose the proposed amendments.

I urge the Federal Government to withdraw its Exposure Draft of the Freedom of Speech (Repeal of Section 18C) Bill 2014.

My presentation to the East West Link LMA Assessment Panel

I delivered a personal presentation to the East West Link LMA Assessment Panel on Thursday 10 April 2014.  Here it is.  You also download it here [PDF]

I cycled along the Eastern Freeway in 1975 before it was opened to traffic from Thomsons Road Bulleen to Alexandra Parade. I recollect this took about 20 minutes, about half the time compared to busy road routes such as High Street Kew.  This highlights how effective cycling can be as a transport mode if safe and convenient cycling infrastructure is available.

The natural course of Koonung Creek, where I often played as a boy, was lost when the freeway was extended over it from Thompsons Road to Doncaster Road.

At the time the freeway was further extended from Doncaster Road to Springvale Road, VicRoads announced they would downgrade the shared bicycle and pedestrian path they had committed to build.  I wrote to the then Minister for Transport and to Garry Liddle, the Eastern Freeway Project manager (now Chief Executive of VicRoads).

Garry Liddle assured me at the time that the Eastern Freeway would:
·         Reduce the amount of traffic on Doncaster Road and other local roads.
·         Not increase the total number of cars used for transport as they would simply shift to the freeway
·         Result in reduced air pollution as car engines on the freeway would be operating at their most optimum level with all vehicles all travelling at around 80km/h
It was quite obvious to me that most of these claims were patently false both then and now.  Doncaster Road may be less busy, but the total number of cars using the freeway has increased greatly. Cars are now often banked up in stop–start traffic back to Tram Road and beyond.

This highlights the myths that are used to falsely and fraudulently justify freeway projects.

For the East West Link, two major myths among many are that 1) it will reduce traffic congestion on Hoddle St (more cars clearly means more congestion) and 2) that it will reduce commute times for those travelling by car from and to outer eastern and south-eastern suburbs.  Chronic congestion on City Link and the Monash Freeway provide clear evidence to the contrary.

In addition, cities such as Los Angeles that have very extensive multilane freeway networks suffer long periods every day when chronic traffic congestion slows them to a crawl. I have personally experienced this.  When operating “normally” these same freeways are also daunting to use due to very fast traffic and multiple required lane changes and confusing interchanges.   The risk and occurrence of serious collisions is very high.

I note that the current plans for the East West Link are highly likely to stop the possible construction of the Doncaster Rail Line due to use of land for the Hoddle Street Interchange and the addition of two extra freeway lanes from Tram Road into Alexandra Parade.


8:05am: Traffic at a standstill on the Monash Freeway
John Karim @SuperFunFunJon
Over 1 hour from Sth Gippy Hwy to Springvale Rd on Monash! At a stand still COME ON!! @mmmhotbreakfast
7:56 AM - 9 Apr 2014

The Age. 9/4/14 7:22am: There's been a crash now in Hawthorn on Auburn Road near Burwood Road. And a reminder Williams Road is likely to remain closed until 9am

Melbourne's wet-weather traffic chaos
http://www.theage.com.au/victoria/melbournes-wetweather-traffic-chaos-20140409-36byv.html
Melburnians heading to work are facing traffic chaos as wet-weather accidents cause road closures and blockages around the city. An early-morning accident involving a reportedly drunk P-plate driver smashing into a power pole on Williams Road, Toorak, has resulted in the road's closure for most of the day

Embarcadero Freeway, San Francisco http://bit.ly/1lPXSaY
A massive, stacked freeway (Route 480) ran right along what is now one of the most scenic views of the bay. The freeway was considered for removal since the early 1980s. Demolition began in 1991 after earthquake damage. The result was a triumph for downtown San Francisco, providing miles of public space, walking and bike paths, plus new transit routes where the double-decker freeway once was. The city helped prove that freeway removal was not only possible but could be an economic boon.

The last significant passenger rail line was the Glen Waverley Line, built in Melbourne in 1932. Since then hundreds of kilometres of freeway and tollway projects have been built, including: 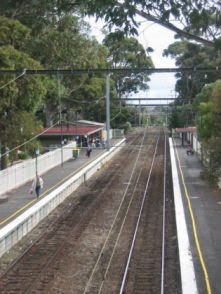 Posted by Peter Campbell at 3:53 pm No comments: Links to this post