TO: Josh Frydenberg
Minister for Environment and Energy,

I’m writing to you today with a very important message about ARENA, the Australian Renewable Energy Agency. That's the Agency you want to cut $1 billion in funding from.

ARENA is a critical force in driving renewable energy research and development in Australia. It has funded projects that developed the most efficient solar PV [1] and solar thermal technology in the world [2].

ARENA is crucial if Australia is to continue to lead in renewable energy research and innovation. If protected, projects funded by ARENA grants will create thousands of jobs [3], and help Australia transition to a renewable future.

Your government talks up innovation, but slashing ARENA's grants funding will cut the legs out from underneath a key industry that would otherwise be set to boom.

As your constituent, I am asking you to lead on innovation and make the right decision for Australia's energy future. Don't send Australia back to the Dark Ages. Don't cut ARENA.

The same applies to coal seam gas - there should be a permanent ban on exploration and production of CSG in Victoria.

Regarding your previous comments on nuclear energy, could you please confirm that this dangerous and expensive energy source will  not be used in Australia?

[3] Queensland solar projects that could create 2,600 jobs at risk in federal cuts, The Guardian, 24 August 2016, https://www.theguardian.com/environment/2016/aug/25/queensland-solar-projects-that-could-create-2600-jobs-at-risk-in-federal-cuts

Posted by Peter Campbell at 2:46 pm No comments: Links to this post

Australian Census 2016 - rank incompetence, lies and a failure of outsourcing

The conduct of the Australian Census 2016 is a worrying demonstration of government incompetence.  Here are my observations on the debacle. 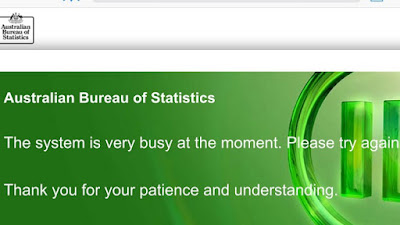 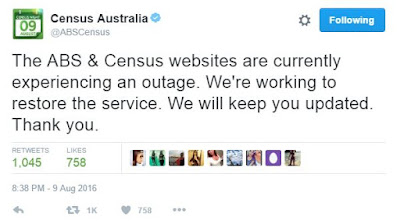 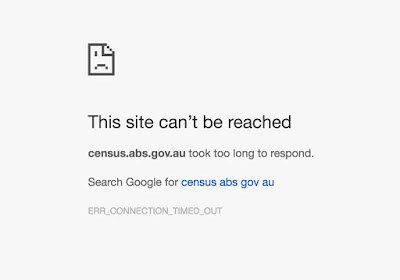 In the lead up to the Australia's 2016 Census serious concerns were raised relating to a change in the retention of personal data that allows respondents to be identified and what this would be used for.

I didn't see an adequate response from the Australian Government or the Australian Bureau of Statistics about why this was being done and what the personal identification data links would be used for.

I have concerns that government departments and other authorities could access this data and use it to track down issues with individuals, which is not the purpose of census data.


Funds stripped from ABS
The Rudd and Abbott governments both cut funding for the ABS.  This set the scene for the debacle that was to follow.  The ministers previously involved in this were Kelly O'Dwyer and Joseph Ciobo.


Online data collection outsourced to IBM
In a apparent attempt to save money a decision was made - its not clear to me by which minister - to shift the majority of data collection to an online process using the Internet, and to outsource the technology solution to IBM.

With this outsourcing, it was vital that requirements for the solution be specified by government, including:
Statements were made by the ABS and the newly appointed minster Micheal McCormack that everything was in order, data would be secure and the website would handle the number of user that would use it on the night Tuesday 9 August 2016 (data collection night).


Website meltdown and failure
During the evening of Tuesday 9 August 2016 people experienced problems accessing the website.  Some people completed forms but were not able to submit them.  Others couldn't access the website at all.  Messages via Twitter from the ABS were confusing - they said to "try again later".  Millions of people gave up trying to submit their response and were left wondering what had happened.


The morning after - claims of hacking
There was intense interest on Wednesday morning on what had happened. Claims emerged on ABC morning radio that

"no data has been compromised"

"a hardware router failed that prevent people accessing the website"

"the website was tested for up to 1 million concurrent users"

It is not possible to determine the veracity of any of the above claims as no information is available to validate them.

More recently, it has been claimed that:

What these claims highlight is rank incompetence by the ABS, the Government and IBM.


Solutions
I work in IT.  The following solutions were possible, but apparently neglected.

Robust security:  Encrypted sessions to secure data (appears to have been implemented)

DDOS protection:  Mechanisms are available to identify and avoid DDOS attacks, which are quite common.

Drop the extended data retention:  In the absence of valid reasons for retaining identification data longer, this should be dropped.

Hardware failure: Redundancy and fail over is required, preferably via virtual devices rather than physical ones.

Increase scalability: If the application has been written properly (it may not have been) and the solution is cloud hosted, then performance can be scaled up (e.g. by instantiating more virtual servers) as required, and scaled down when not required.

The Australian online census meltdown is a failure of outsourcing and reveals gross incompetence of the Australian government.

Turnbull has said that "heads will roll". Perhaps Turnbull and McCormack are the ones who should be sacked for rank incompetence?

This debacle makes a complete mockery of Turnbull's "innovation agenda".

Posted by Peter Campbell at 12:38 pm No comments: Links to this post