TO: Josh Frydenberg, MP for Kooyong.

I wish to draw to your attention that the Abbott government's attempt to withdraw the World Heritage nomination of Tasmanian forests is very wrong.

The IUCN has found that, contrary to your government’s claim that the area was heavily degraded, that:
Eric Abetz and Tony Abbott have grossly misrepresented this situation and told outright lies about this forest nominated for protection.

I wish you to represent my views on this in the Australian Parliament. Could you please confirm to me when you do this and provide me the the Hansard reference?

Posted by Peter Campbell at 4:22 pm No comments:

Another war in Iraq?

I protested outside Peter Costello's residence with about 30 other people when John Howard committed Australia to the war in Iraq "against Saddam Hussein's weapons of mass destruction".  At the time, I was concerned that military intervention in Iraq would create ongoing instability in the Middle East and exacerbate terrorism.

Imagine if another nation came to Australia and waged war against us because they thought we were up to no good!

So George Bush, Tony Blair and John Howard had their war, without approval from the United Nations, and with no compelling evidence that WMDs were still there.

They may have won some battles, but they were never going to "win the war".

Tens of thousands of Iraquis died.

Sectarian communities such as the Shiites, the Sunnis and the Kurds have become even more polarised

The attempt to force western-style democracy on Iraq has failed.  The dominant Shiite majority has not formed consensus among minorities and corruption is an ongoing problem.

There has been regular suicide bombings and improvised roadside bombs - these have been conducted by "insurgents" - including locals who hate being occupied.

Now ISIS has displaced the shaky Iraqui government forces from the North and are moving towards Baghdad.  A civil war has now started.

Tony Abbott stated to Obama during his visit to the United States that he "wouldn't rule out Australia participating (again) in another military intervention" and that "Australia would support the United States".  So it appears he thinks the decision to commit Australia to another foreign war is his alone, rather than the Australian Parliament.

I don't think any political party (or its Party Room) should have the right to make this decision. I believe that a 75% vote of all Australian parliamentarians should be required for this.

If Australia, the United States and Great Britain go back to Iraq for another war this will solve nothing and create more problems like those we have already seen.

It would be an unwinnable war with catastrophic consequences.
Posted by Peter Campbell at 11:55 pm No comments:

Melbourne's metropolitan rail network is in a chronic state of disrepair. The entire system needs a complete overhaul after decades of neglect.  Signals regularly fail,  tracks buckle in the heat, and most stations lack adequate shelter.

No new suburban train lines have been built in Melbourne since the Glen Waverley line in 1932. Critical rail projects that should now be servicing growing communities where over a million people don't have close access to trains include the Rowville line (including Monash Uni and Chadstone), the Doncaster Line (if the East West tollway tunnel proceeds it may never be built).

It is galling to see the Napthine government, driven by politics and its desire to be re-elected, has allocated more funding ($100m) on one line than all other lines combined.

The Bayside Rail Project, that services the marginal seat of Frankson, includes upgrading tracks, repairing overhead wires, painting stations, works on signalling and level crossings and installation of new SPOT monitoring systems which replace mirrors with cameras to provide train drivers with a better view of passengers getting on and off trains at platforms. 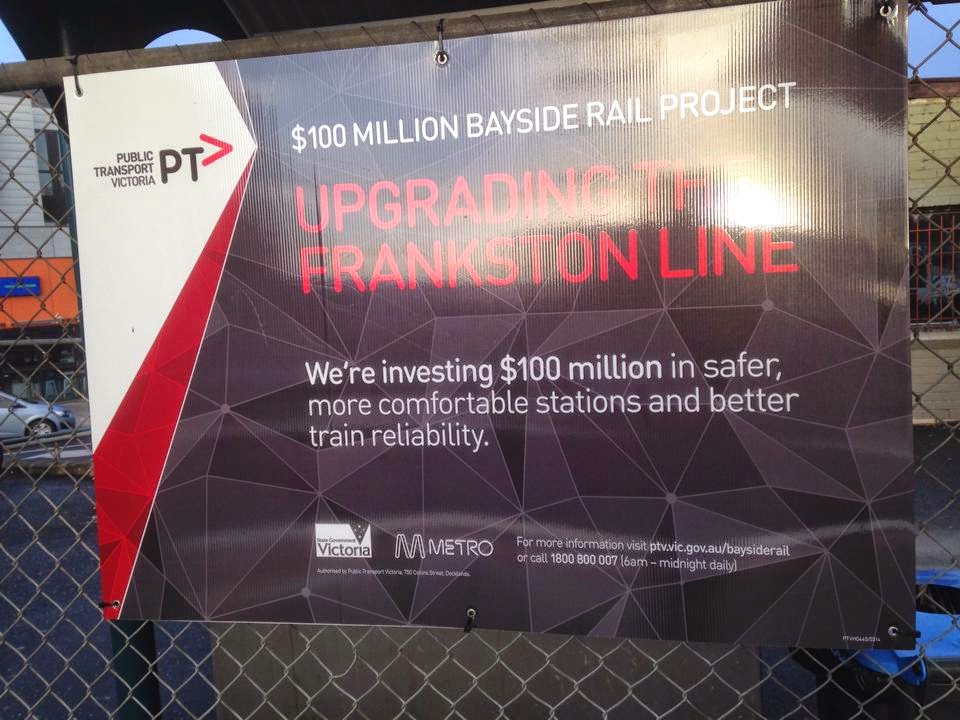 The harsh reality is that these type of works are urgently required on all sixteen existing lines. At a rough estimate this could require 1 to 2 $billion.

While this expenditure on the Frankston line is worthwhile and well overdue, its a great pity that the rest of Melbourne's rail network gets virtually nothing yet again.

We clearly need to separate politics from transport planning to avoid decisions being driven purely for political gain.

I am writing to you as Chairperson of the World Heritage Committee, to bring to your attention my deep distress and alarm at the attempt by the Australian Government to remove 74,000 hectares from the Tasmanian Wilderness World Heritage site.

The proposal before you by the current Australian Government is politically motivated and is contrary to Australia’s obligations as a signatory to the World Heritage Convention.

The Australian Federal Government has submitted evidence to the World Heritage Committee that large sections of the area under review are severely degraded. This is false - less than 10% of the area proposed for de-listing has been disturbed and the vast majority of this World Heritage Area remains untouched, pristine and wilderness quality natural landscapes.

I would be grateful if you could draw my concerns (and the concerns of many other Australians) to the attention of the World Heritage Committee.

Posted by Peter Campbell at 4:30 pm No comments: