Another bike crash, another driver that "didn't see me", more injuries

I was cycling to work on 9 September 2015 on my back streets route attempting to avoid traffic on my way to the Gardiners Creek Trail when disaster struck again. 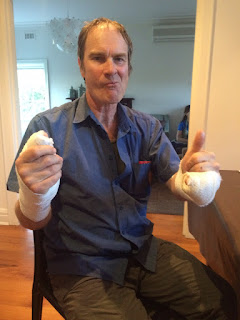 I was cycling along Somerset Road approaching the small roundabout at the intersection with Denman Avenue.  A brown Ford Territory was slowing down approaching the roundabout on my left as I entered it apparently "giving way" to me.  I was moving at around 10-15 km/h. 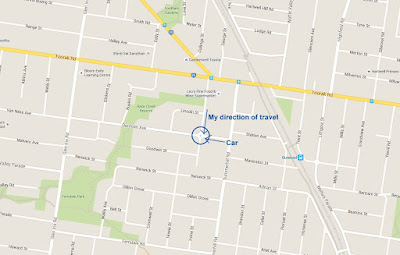 Suddenly, the vehicle sped up and was coming right at me.  I braked hard and avoided going under the front of the car and getting run over and possibly killed.

However, I couldn't slow down enough to avoid the car and hit the rear passenger door and bounced off it and hit the road yelling.  I was on the road screaming. Both my hands took the brunt of the impact and my left leg was very sore. The driver stopped. The woman driving the car was apologetic and said "she didn't see me".

A schoolboy walking along Denman Ave saw the whole thing and called 000.  An ambulance came promptly.  My injuries were quickly assessed and another emergency hospital visit was required.

The police came shortly after the ambulance and assessed the situation. I spoke to them briefly.  They advised the driver she would get an infringement for failing to give way.

X-rays were taken at Epworth.  My left little finger was broken (malate fracture) and required surgery.  My right wrist and thumb were very sore but no fracture was evident in the x-rays.

I was unable to see a orthopaedic specialist while I was in the emergency department so I went home bandaged.  I visited an orthopaedic surgeon the following day.  She sent me off for an MRI and later confirmed that ligaments were torn off my right thumb and that it had been nearly dislocated. Surgery was required to re-attach the ligaments otherwise my thumb function would be compromised. 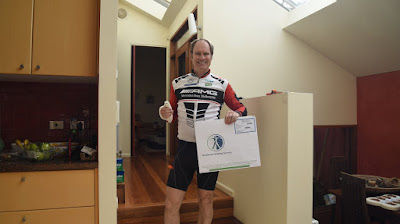 I had two operations on Friday: a wire was inserted in the tip of my left little finger to assist the bone healing correctly and the torn ligaments on my right thumb were stitched back to the bone. 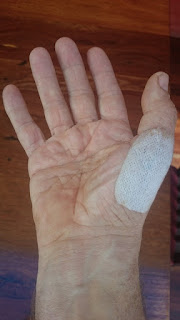 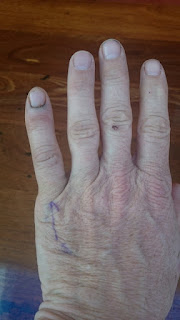 I had the following week off work as I was not very mobile or able to use either hand much and was taking pain killers.

I returned to work the following week as I was keen to resume "normal life" as much as possible. The bandages were replaced with plastic splints by the hand therapist which improved my very limited dexterity a bit. 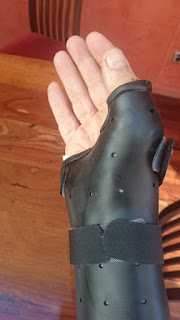 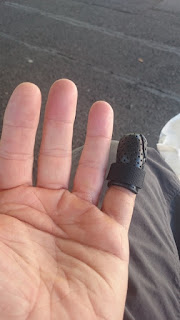 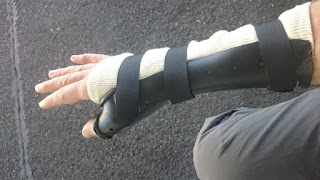 After 2 weeks the cumbersome right splint was reduced in size which improved my dexterity further. 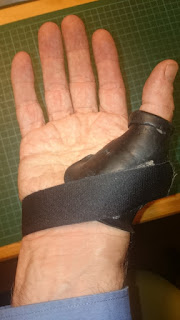 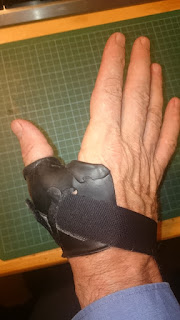 The wire in my little finger comes out on 23 October but it will take some time to get the joint moving properly again.

The right wrist ligament surgery needs even more time to heal, possible until the end of November. So no cycling or kitesurfing for me until then, which is extremely frustrating.

I have been feeling terrible however since the crash.  Personal interactions at home, out and about and at work were very difficult for me.  I have been feeling extremely angry about getting hit yet again, 8 to 10 or more weeks out of action (no cycling or kitesurfing), the total lack of action on providing safe separated cycling infrastructure in the City of Boroondara and the Victorian government, and motorists who drive around at excessive speeds and don't look for pedestrians or cyclists.  This anger is washing over me most of the time now.

I have had trouble sleeping and get flashbacks of the car coming at me followed by me hitting it and ending up on the road bruised and broken.  This was a near-death experience.

Blackness and anger has descended on me like a cloud that will not lift.  Everything seems wrong. I was nearly killed.  I don't trust any motorist on the roads now. Every car is a lethal death machine that can easily kill.  I flinch on trams when cars hoon past. I am hyper vigilant of all cars while driving and walking.

Going through the Citylink Domain tunnel in a taxi with the driver sitting 3 metres behind a truck and cars all around, I visualised brake lights, a huge crash, carnage and flames everywhere and felt panicked and sweaty.

I am seeing a psychologist who advised me I have Post Traumatic Stress Disorder (PTSD) symptoms - he referred me to a neurologist.  The neurologist confirmed I have severe PTSD and has prescribed me medication. He is referring me to some else for further treatment to deal with the PTSD before it gets worse.

I wasn't expecting this.  I thought my bones and ligaments would heal quickly and I would bounce back, but the trauma associated with the crash (and the previous two recent bike recent crashes and hospital visits) is proving to be a big issue.


Cycling on Melbourne streets and roads is now unsafe

Our roads are rivers of deaths - cars maim and kill on a daily basis.

Main roads are now unsafe for cycling. Some motorists squeeze past cyclists while travelling at 60 km/h leaving little gap. Quite a few are distracted looking at their phones or GPS and could run up the rear of any cyclist.

Side streets are also unsafe as drivers rat run down them to avoid congested roads and sail through roundabouts at speed with only a cursory glance.  Small roundabouts have high rates of bicycle-car crashes and are unsafe at any speed.

I now feel that cycling on any road with cars is an unacceptable risk to me - its not worth dying for. What am I trying to prove?

I have cycled over 100,000 km during my life, including 1200km in 69 hours on the Paris Brest Paris Audax event.  I raced on the roads with the Southern Vets for 12 years.

I have regularly commuted by bicycle to the Melbourne CBD since 1983 but I am not riding on any roads with cars any more. The only option I have left is to drive to Gardiners Creek with my bike on the car to get to the bike path where I can cycle in relative safety.

Bike crashes, injuries and deaths appear to be rising rapidly across Melbourne and on country roads. Some recent crashes and deaths:

There are still no safe east west cycle routes through Boroondara

All these roads are very unsafe for cycling.  There are narrow painted bike lanes along Mont Albert Road (but cars are allowed to park obscuring the bike lane) and on a short eastern section of Burwood Rd (lane is in the car door zone).  Neither of these provide effective protection to cyclists.

There are high bicycle accident rates on all these roads that illustrate how dangerous they are.

There is no point producing the "PBN" if no safe separated cycling infrastructure ever gets built along designated routes.  The PBN is quite simply a waste of time and money. 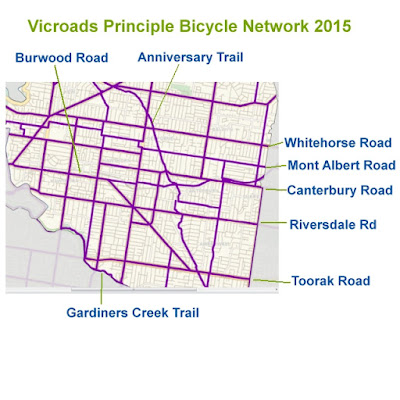 Separating cyclists from cars, trucks, buses and trams is needed to ensure their safety, yet there is very little progress on building safe cycling routes in Melbourne.  There are strategies and plans, but nothing is being built.

Copenhagen had bike paths separated between the road and the footpath when I visited in 1985.

Existing rail corridors have space available for bike paths and there are even short sections of bike paths along them, but there is a lack of political will to use them for this.

Construction of the Box Hill to Ringwood Rail Trail is progressing slowly but cyclists will only have road routes west of Box Hill.

The Hawthorn to Box Hill Trail would provide a safe east west bike route for cyclists aged 8 to 80, but unfortunately there has been no progress on building or even planning it. 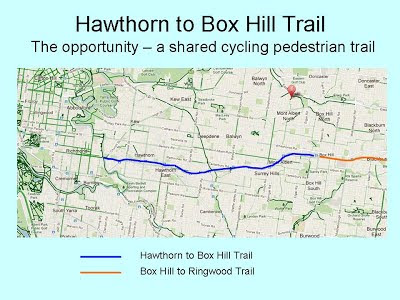 The Hawthorn to Box Hill Trail and similar routes along railway lines could be built as "Solar bike paths"using prefabricated spans that incorporate a concrete path base, low walls and a roof with solar panels. 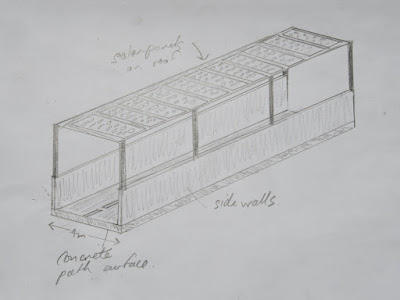 Meanwhile, cycling deaths and injuries are increasing at great cost to our community.

Posted by Peter Campbell at 11:38 pm 8 comments: Links to this post