I stood as an independent candidate for Cotham Ward in the Boroondara Council elections counted (by postal vote) and Saturday 29/11 and Sunday 30/11. Here is my campaign blog.

The results have been declared -

Even though I got the highest primary vote (for which I am pleased) David Bloom (Liberal, works in David Davis' office) got elected by the preference flow from the other two.

It was actually quite close - if Bila got ahead of Bloom then I would have been elected. I think it is a very good sign that so many people in Cotham ward voted for a sustainable future!

I would like to thank those who helped with leaflets and scrutineering. I would also like to thank the many people in the ward who contacted me during the campaign about local issues, and for their encouragement.

Also, it was a good result for Des Benson to come second as the Greens candidate in Studley Ward.

I understand that the overall result for Council is that 4 out of 9 are Liberals (or sympathisers) so they don't quite have a majority - unless they elect a Liberal Mayor who will have a casting vote.

Also, apparently Brad Miles (Bellevue Ward), while not a Liberal, opposes the Darebin - Yarra bike link bridge, so the Council decision to support this is now likely to be reversed. Hopefully this won't happen.
Posted by Peter Campbell at 10:59 pm 1 comment: Links to this post

On November 19, 2008 I went to the " climate change debate" in Hawthorn, Melbourne, between Professor David Karoly (Climate Scientist and IPCC Lead Author) and William Kininmonth (former Meteorologist and head of Australia's National Climate Centre and notable climate change skeptic). The debate was organised by Leon Zembekis. 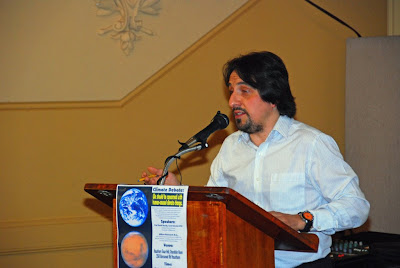 About 30% of the 200-odd audience were vocal skeptics/denialists, apparently there to hear their guru take down the brash scientist.

It seems to me that the skeptics demographic was oldish, often grey and/or balding, mostly male. They were quite affronted by much of what Karoly said. “Don’t insult our intelligence” was one taunt they shouted. They were spoiling for a shouting match.

Kininmonth basically said the earth is a bit warmer, but that it doesn’t matter, and that increasing CO2 won’t have any significant impact on climate change. He thinks were in the midst of a natural cycle, and that humans have no impact. His presentation was a wierd amalgam of unrelated observations, and contained several errors of interpretation, as David Karoly pointed out during the debate.

In question time I asked Kininmonth what he would say to his children and grand children if he was wrong on climate change, didn’t take action to address it (as he recommeneds) and in 2020 we lost the Great Barrier Reef, Kakadu wetlands and snow in Australia.

There were howls and guffaws from the skeptics in the audience. He didn’t answer the question. Instead, he continued to talk about why CO2 doesn’t matter, why there really isn’t a problem, and why we cannot afford to give up our modern energy hungry lifestyles. I said he didn’t answer my question. He said he was “comfortable with talking to his children and grand children."

A Liberal Councillor present (who may also be a skeptic) later mentioned to a friend that “I had asked a leading question”. Well yes, it was hypothetical. . .

It seems to me that the skeptics are actually very scared of climate change. They have constructed their own reality in place of the one informed by scientific observation. When you challenge their alternative reality they react with fear, loathing and anger.

While there were clearly rent-a-skeptics in the crowd - word had got around they should be there - I think we will see similar reactions (albiet less extreme) in the wider community too. Our civilisation seems to be entering a time of stress and peril.

I think we need some real and effective leadership to handle this - and I don’t think the majority of our political leaders from both major parties are up to it.

Good on you Leon for organising this forum. It was very interesting to participate.

It will be interesting to see how the new Boroondara Council will take action on climate change, and whether they lead the community towards solutions. 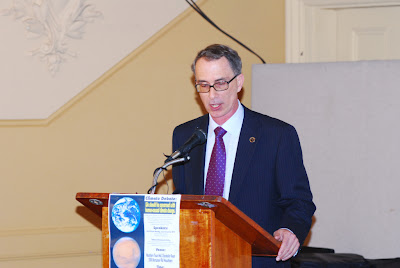 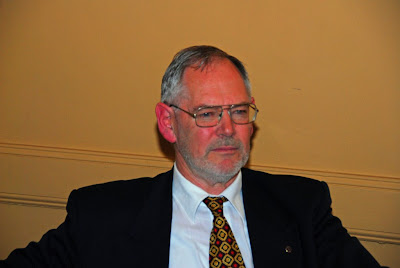 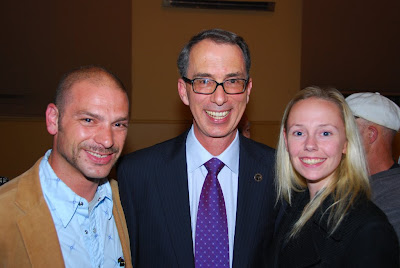 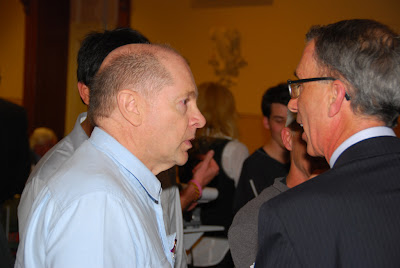 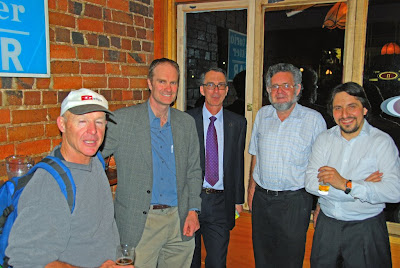 Myself (2nd from left), David Karoly, Ian Enting and Leon chatting after the event.

Posted by Peter Campbell at 11:25 am 5 comments: Links to this post

Water Minister Tim Holding's helpful suggestions of the things we can do as individuals to save water, such as shorter showers and voluntary water usage targets, are already embraced with enthusiasm by many Melbournians.

As an example, water usage at our Surrey Hills house is about 5 litres per person per day thanks to our water tanks, which have just been topped up by the welcome rain. These tanks have now kept our house supplied for 7 years, so I really wonder why the Government is spending our money on huge energy hungry engineering projects such as the desalination plant and the ill-considered north south pipeline when they are not needed.

These risky, expensive and environmentally damaging projects should be the last options considered rather than the first.

Melbourne needs to better utilise its water sources. Storm water capture, recycling and stopping logging in our water catchments are all much better options for saving our water and much more affordable, but they are currently overlooked by government.

Safeguarding our water supply is important to us all. Government has a key role in choosing and developing sustainable water strategies and projects - such as legislating for decent water tanks for all new houses, assisting local councils to build suburban storm water capture facilities, and recycling and reusing water rather than flushing it out and polluting the ocean at Gunnamatta.

One wonders when they will listen to what the public want.

Posted by Peter Campbell at 11:39 pm 4 comments: Links to this post

We need electric cars and we need them now

The Australian car industry is going the way of the American one - a headlong rush to extinction. With long term rises in oil prices inevitable, the days of large petrol and diesel powered vehicles are numbered.

Cars with electric drive trains produce 30% less carbon emissions than those powered by internal combustion engines - even taking into account the emissions from coal fired power stations to generate the electricity. They can also transition to being supplied by zero emissions electricity as supplies come on line. Plug in hybrids would be suitable for those requiring a longer range. 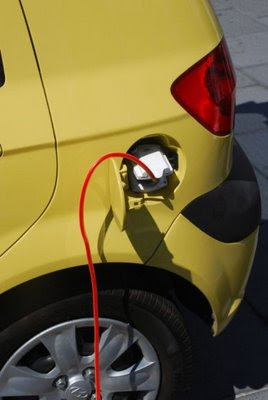 Blade Electric Car
Yet, no major Australian manufacturer yet makes an electric car that would be suitable for the majority of short trips made every day in the city. There are less than 300 electric vehicles on Australian roads right now. Unfortunately, the $6.2 billion allocated by the Australian government to make the automotive industry more economically and environmentally sustainable is still focused on tinkering with making internal combustion engines more efficient and hybrids that still require petrol to operate.

This is a missed opportunity. We need electric cars to dramatically reduce our carbon emissions, and we need them now.


Posted by Peter Campbell at 10:30 pm 2 comments: Links to this post