Greens win Fremantle polling over 44% for a new paradigm

Today, Adele Carles, the Greens candidate for the Fremantle byelection, won the seat. This is an event that represents a turning point in Australian politics.

It is the first time a Greens candidate has polled over 44% of the primary vote. The previous record was 38.96% in the 2005 Marrickville by-election.

It is only the second time that that the Greens have come first on primary votes, the first being when the Greens outpolled Labor's primary vote in the NSW state district of Vaucluse in the 2007 election.

Adele Carles defeated the Labor candidate, who polled around 38% of the primary vote. The Liberals did not field a candidate.

This represents a paradigm shift in Australia's political landscape. With both major parties found wanting on critical issues such as climate change and water policy, the Greens platform of reshaping Australia to a sustainable and climate friendly economy has been endorsed by a clear majority of Fremantle voters.

If this is replicated across several other House of Representatives seats in the upcoming 2010 federal election as appears likely, the Greens could well hold the balance of power and enter into a coalition government with one of the major parties.

This would mean pathetic policy such as Labor's 5% emission reduction commitment would be "greened up" to within the 25% to 40% range scientists say we need.

And the 3+ billion gifted to the polluting coal industry by Kevin Rudd would instead be redirected to zero emissions clean energy alternatives.

There is now considerable hope Australia can seriously address the climate emergency that we are confronted with, and contribute to an effective global agreement on reducing emissions and tackling climate change.

Exernal links
Post script
This is the second time the greens have won a single-member lower house seat in Australia - the first time being when Michael Organ won the federal House of Representatives seat of Cunningham in a 2002 by-election, when the Liberals also did not field a candidate. On that occasion, Organ received 23% of the primary vote and was elected by the preferences of other candidates (as was Adele).
Posted by Peter Campbell at 10:51 pm 3 comments: Links to this post

Summarising the environmental & energy items in the 2009 Federal Budget:

The Government will invest $4.5 billion (including $1 billion of existing funding) in a new Clean Energy Initiative, including:
Additional sustainability programs funded under the Budget include:


For those that want more detail, the Climate Change Budget Overview 2009—10 provides a summary of the Government's climate change strategy, describing the objectives of each measure and the providing the name of the agencies who will implement them.

Overall, for I give it 2/10 for transitioning us to a low carbon economy and off coal.  There is far too much corporate welfare gifted to the coal industry, and not enough directed to efficiency measures and genuine clean energy.
Posted by Peter Campbell at 10:18 am 1 comment: Links to this post

My speech at the senate candidates event at North Melbourne

I attend another of the series of the "meet the senate candidates" events being held across Victoria for the preselection of the Greens lead senate candidate for the 2010 federal election.

This time, we were given a hypothetical scenarios where, as Senator for Victoria, there were four options to attend events.

These were:
I chose option 2 due to the large audience of around 500 people, and the opportunity to reach an audience that shares our values but due to their age and background are statistically less likely to vote for us.

You can read the speech I wrote - as the "Greens Senator for Victoria" at this hypothetical future meeting, here.
Posted by Peter Campbell at 11:02 pm No comments: Links to this post

Kevin Rudd is playing politics with our climate

So why has Kevin Rudd and Penny Wong just done spectacular backflips and both decided to delay the implementation of their flawed Carbon Pollution Reduction (Reallocation) Scheme by one year?

Why have they introduced a cap on the carbon price of $10.00 per tonne?

There are two answers to these questions:

The politics is asinine. Kevin Rudd does not want to negotiate with the Greens who have stated they support emission reduction targets in the range of 25-40% that will be negotiated at Copenhagen later this year. So Kevin Rudd has designed the CPRS so the Liberal-National opposition, and Malcolm Turnbull in particular, will be forced to support it.

Turnbull has been saying it should be delayed by 1-2 years; now it has been. Turnbull supports the 5% target. Turnbull is under pressure from the skeptics in his party - such as Nick Minchin and Wilson Tuckey - to support a weak and ineffective CPRS.

Business as usual - links between government and industry

Turnbull is also under pressure from the same industry lobbyists - such as Heather Ridout from the Australian Industry Group, and representatives from the coal/fossil fuel lobby (the "Greenhouse Mafia") - to support a weak and infective CPRS. They will threaten the opposition with hostile advertisements in marginal seats during the next election, and probably a few more dirty tricks too.

If Turnbull - and the Liberal National "Opposition" - cave in and vote in the Senate for the CPRS with the Rudd Government we will have a scheme locked in that won't reduce carbon emissions.

Any parliamentarian who votes for the CPRS is playing Russian Roulette with a safe climate future. Kevin Rudd has stated that 450ppm CO2 is acceptable. Sorry Kevin, I disagree.

Scientists tell us that this could result in 3 degree global temperature rise, sea level rises of over 2 metres, and more frequent severe bushfires.

What can we do?

We must maintain hope that our political leaders will act responsibly and take immediate action to reduce climate change. We need to keep telling them that they must.

We need to spread awareness in the community about how "political stitch ups" are endangering our shared future, and that of the planet, by feeding the climate emergency we are now experiencing.

I think we also need to consider how we can get action on climate change informed and driven by science rather than hijacked by short term political motives.

I have also sent Don Henry from the ACF an email telling him I am reconsidering my 20+ year membership and support of the ACF, after his totally inappropriate glowing endorsement of Rudd's CPRS backflip. Is he planning to run for a safe Labor seat like Peter Garrett did?

External links
A video from the Greens

Posted by Peter Campbell at 9:45 pm 2 comments: Links to this post

A public bike plan for Melbourne

It is great public bike plan finally take shape in Melbourne. Sharing bikes at convenient locations provides us with an environmentally friendly means of travel in and around the city. 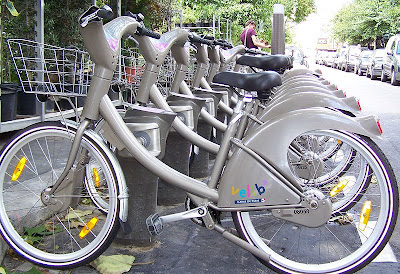 Velib bikes in Paris
Source: http://commons.wikimedia.org/wiki/File:Velibvelo1.jpg
I suggested a scheme for this to Melbourne City Council back in 2001 after using bikes in the city of Zug in Switzerland back in the 90s. David Risstrom took up the cause back them but it stalled.

It is surprising how long it can take for simple good ideas to happen here. Since they are only calling for tenders, it appears that the bikes won't actually be available until 2009 or 2010.

To make this really work, we need to make Melbourne more bicycle friendly with:
The current Principal Bicycle Network, though a step in the right direction, relies too heavily on routes with inadequate bike lanes (often just paint on the road, ignored by many motorists) and shared paths (were conflict and danger between pedestrians and cyclists is growing).

Shared paths can be acceptable for some local and recreational usage, but they are not adequate or safe for significant bicycle transit usage.

The best option would be to put sections of our existing rail and tram networks underground and put linear parks, bike transit routes and some commercial, residential and recreational facilities in their place.

Posted by Peter Campbell at 10:13 pm 3 comments: Links to this post

Kevin Rudd's flawed emissions trading scheme with its very weak 5% reduction target and ridiculous 15% upper limit is unlikely to be passed by the Senate. I disagree with Michelle Grattan's conclusion (Age 1/5) that the CPRS in its current form is better than nothing.

The CPRS, in addition to grossly inadequate targets, also gifts billions to the worst polluters. In doing so, it removes incentives for the worst polluting industries to clean up their act. It is also way behind the recommendations of scientists and the Bali convention where emission reduction ranges of 25% to 40% were flagged.

Australia would be laggard at Copenhagen with the CPRS, not a leader. Hopefully all parties in the Australian Parliament will agree on effective measures to reduce carbon emissions and tackle climate change that the Australian people are demanding. We need to reframe politics from being part of the problem to being part of the solution.
Posted by Peter Campbell at 9:08 am 1 comment: Links to this post