I have been wanting to take some aerial video for a few years now but I never got the confidence to fly my Blade 400 helicopter - its tricky to fly and too easy to crash.

Quadcopters have changed all that.  With GPS guidance, "safe mode" and return to base they are much easier to fly.

I bought the Blade 350QX and a GoPro camera to go with it.

Here is my first video, taken in Highfield Park in Surrey Hills.


Its quite a buzz flying this quadcopter platform.   Down the track I will have a go with FPV (First Person Vision) goggles to get a real flying experience.

This sun tax is outrageous – over 1 million families in Australia have made the move to solar to take control of their energy production and reduce their energy bills. It’s unfair that families who have done the right thing would be penalised in any way.

Solar is not what is driving up electricity costs. Investment in poles, wires and dying technologies are. Instead of a sun tax, you should look at the best way to deal with those network costs, which are, in truth, the real costs increases that are hurting all Australians.

Solar energy is the energy production of the future, growing internationally and rising rapidly here in Australia. We should be increasing investment in solar – not penalising families and letting big power companies dictate our energy future.

When Denis Napthine took over from Ted Baillieu as Premier of Victoria in March 2013 he took charge of government that many thought had lost its way.

Napthine set about creating a new "firm leadership" persona to distance himself from his predecessor.  Undoubtedly he was also influenced by Liberal Party strategists working on the campaign for the Liberal-National coalition government to be re-elected in 2014. 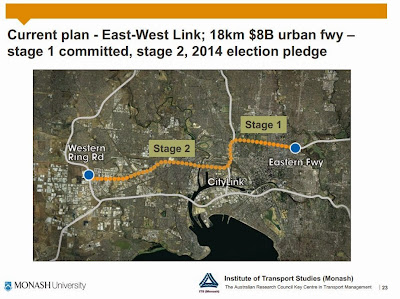 The reasons provided by the Napthine Government for the east west tunnel are that it will:

Unfortunately, the first two of these are falsehoods and the second two are highly questionable.

Transport studies have shown that 95% of traffic travelling in on the Eastern Freeway is destined to a location other than along the route of the proposed tunnel.  This traffic is destined to the Melbourne CBD or to the south of Melbourne.  Much of this traffic exits onto Hoddle Street which turns into Punt Road.  This route is frequently gridlocked by very heavy traffic, which also impedes the passage of public transport buses. 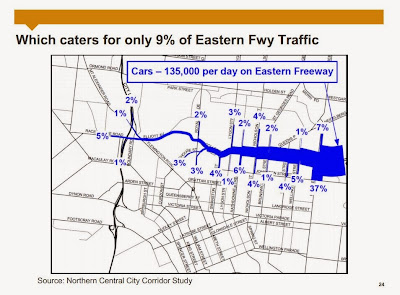 
The Napthine Government is advertising their East West Link on billboards positioned along Punt Road and stating that congestion will be reduced and car commuter travel times will decrease. 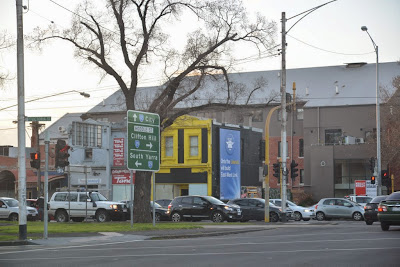 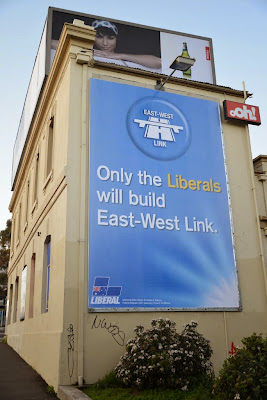 While the Trains Not Tollroads campaign also has billboards along Punt Road challenging these claims. 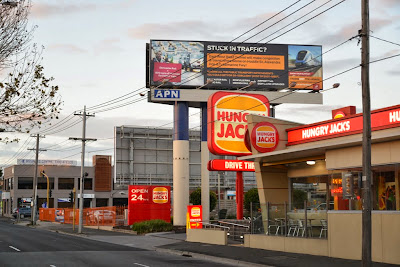 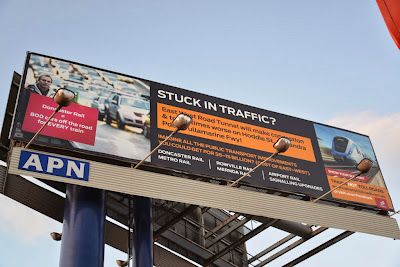 It is quite clear that the proposed East West Tunnel would do nothing to reduce congestion on Hoddle Street, Punt Road, Nicholson Street, Brunswick Street and other inner Melbourne car commuter routes.

"Reduced travel time" is the main benefit that Napthine Government claims the East West Tunnell will provide.  However, as the vast majority of traffic coming in on the Eastern Freeway will still have to queue to get out tunnel exits onto inner Melbourne car commuter routes, cars will bring tunnel traffic (3 lanes each way) to a stand still.  The long "tailback" of cars on the Eastern Freeway will still occur.

Building more road infrastructure, and not providing fast and effective public transport options, will encourage more people to commute in their cars.  The minor increase in road capacity provided by the East West tunnel will be simply swamped by additional car users.  There is clear evidence of this on the Monash Tollway and City Link tunnels under the Yarra River.  These are brought to a standstill nearly every morning by heavy commuter traffic.

The proposed East West Tunnel will do nothing to reduce travel times for people driving in along the Eastern Freeway.

A lot of public money will be spent on the East West Road Tunnel/Link if it proceeds.  The assumption that "economic growth will result" is predicated on the project actually reducing congestion and improving transport of people and goods.

Economic growth resulting from spending the money would be equivalent if it were spent on rail projects such as the Doncaster rail line.

This is a furphy.

The project would create jobs during design and construction, but no more jobs than building new railway lines would create.

With no real benefits, massive expenditure and no confirmed "business case" I speculate on the motives of the Napthine Government.

The project, if it proceeds, will also have huge negative impacts on Melbourne, including:
I think the project has been promoted to and targeted to people who already commute by car from Melbourne's outer eastern and south eastern suburbs, including Franskton and beyond.  There are several marginal seats in this area.  If the Napthine Government can convince enough people that there transit times will reduce (even though they won't) then they think have an election winner.

The people who live in inner Melbourne suburbs and electorates such as Northcote, Richmond, Melbourne and Brunswick have been written off by the Napthine Government as they live in Labor-Green seats that the Liberals will not win.  Resident's lifestyles, life quality and air quality will be just collateral damage to the Napthine government.

One possible reason that the "business case" for the proposed East West Tunnel has not been released is that it would not withstand scrutiny.

The Napthine government is placing full page advertisements in newspapers to "sell the benefits" of the East West tunnel.  Unfortunately, they are just pedaling lies. 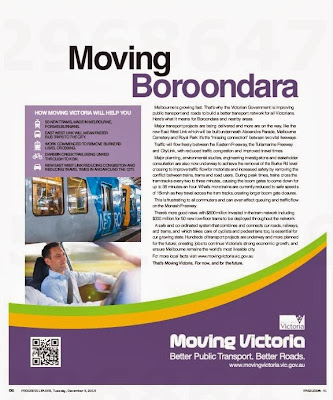 Building a road tunnel that will become an $8 billion underground car park is a very expensive election stunt.

The Victorian Auditor-General’s Office reported recently that in Victoria there is:

Clearly, there is a need to improve planning and decision-making for the delivery of improved public transport infrastructure and services

If new railways were built road traffic would reduce. Many people would "mode shift" from road to rail. One train line can carry the same amount of people as 20 lanes of roads.  This would reduce congestion and improve travel times for those who still choose to commute in their cars.

Safe cycle paths separated from cars would encourage more people to "mode shift" from cars to bicycles for commuting.

A congestion tax levied on people commuting in cars to inner Melbourne and the CBD would reduce traffic and ease congestion.  This would also free up road space for freight transport that cannot be conveyed by rail.

A referendum on the East West Tunnel vs Doncaster Rail would allow Victorians to vote on what they think the best project is.  That would be true democracy.

What can you do?

You can also make a submission to the East West Link Comprehensive Impact Statement.

The Labor government notionally opposes the East West Tunnel, but will most likely continue with the project if they win the next state election.

Victorian politicians have demonstrated that they are incapable of making appropriate, well consider decisions on providing transport infrastructure.  We need a mechanism to separate these major decisions from political interference and election campaigning.

Efficient and sustainable transport solutions will only occur if enough people apply political pressure to both the Liberal/National and Labor political parties.