Midnight Oil is one of my favourite bands. I particularly like the poignant song "River runs red" with the lyrics:

"So you cut all the tall trees down,
You poisoned the sky and the sea,
You've taken what's good from the ground,
But you left precious little for me".
I feel Peter Garrett has now greatly compromised his environmental credentials by campaigning in the Victorian State election against the Greens, and putting his name to a deceitful letter sent to Melbourne and Northcote electorates suggesting that the Greens were directing preferences to the Liberals. Labor told these lies to smear the Greens and pull back their primary vote, a tactic that was successful.

The truth is that:
The Liberals used a different tactic - they widely distributed a green leaflet titled "A vote for the Greens" which contained several incorrect assertions about Greens policies on taxation, drugs and animal welfare. Many of these assertions were sourced from newspaper articles. The author of the leaflet was printed in tiny barely legible print - Julian Sheezel (Liberal Party). This scare campaign was also designed to pull back the Greens primary vote, and was also successful. 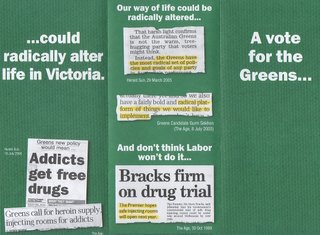 Here is one side of the Liberal anti-Green leaflet.
So both major parties now use well orchestrated political tactics to attack the Greens rather than engaging in a fair and reasonable debate about policies. Both major parties ruled out any preference negotiations on issues. For them the political game is penultimate, not climate change, forests, water, public education or industrial relations.

I don't believe that the means justifies the end, and I think that major party politics is compromising our values, our environment and our society.

Be careful who you vote for, what you see is not always what you get.
Posted by Peter Campbell at 11:58 pm 1 comment:

Climate: Strike while the iron is hot

Below is a timely letter published in The Age. I think that the Howard government's reluctant and equivocal response to climate change will be remembered as his major legacy. And stop whinging about Kyoto not being tough enough John - it is better than nothing. Get over it John, just sign it, then get Australia involved in an international process to put tougher measures in place that apply to all nations.

Australia should be leading by example, and right now our example is unfortunately that of a recalcitrant skeptic, along with the United States. However, with recent admissions from John Howards that 6,000 scientists worldwide can't be wrong - that climate change is occurring - our example is now shifting toward sheer and breathtaking incompetence in the face of impending crisis.

Climate: Strike while the iron is hot
David Cambell, Byron Bay, NSW
Letter to The Age, 8/11/06

The window is open for political action on climate change, with the majority of Australians concerned and willing to bear their part of the global burden ("Voters call for action on warming", The Age, 7/11). But action has to come immediately to ensure that the peaked concern does not turn into resignation - a scenario warned of by climate change communication researchers.

Fortunately, recent weeks have built public pressure up to a peak just at the right time: the poorly reported United Nations Climate Summit this week in Nairobi is offering the international stage to our Federal Government to put its recent commitment to tackle climate change into a binding treaty.

If John Howard has really heard the wake-up call and his recent concern on climate change is more than a PR exercise, he will use this international opportunity. The problem is too big and serious to be dealt with merely on the back of a national election campaign.

And while the creation of a ministry for climate change, as proposed by the PM and Kim Beazley, might look good, it won't stop the planet from warming. Signing on to the international Kyoto Treaty would. None of the about 150 signing countries needed a ministry for that: a responsible government will do.

Posted by Peter Campbell at 10:11 am No comments: 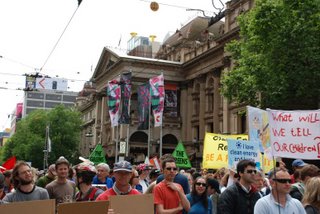 I attended today's Walk against Warming rally in Melbourne along with several thousand others . The walks were held across Australia. It was great to see so many people demonstrating their concern for this issue, which politicians have largely ignored until now. John Howard is still stuck in the mindset that saving us from global warming will be bad for business - when it the other way around. Energy efficient technologies and products are growth industries and exports for the future, not burning and exporting coal.

The Bracks government say they care, but they extended the life of Hazelwood - the southern hemisphere's most polluting power station - and they have only today announced a subsidy for energy efficient appliances. Why do they have to wait for an election to do this?

Meanwhile Ted Baillieu has committed the Liberals to ongoing support of the coal industry and getting rid or the Victorian Renewable Energy Target (VRET) program which would be step backwards.

Vote Green at the upcoming state election - there really is no viable alternative.

ABC news story about the rallies

Here are some more photos I took at the rally. 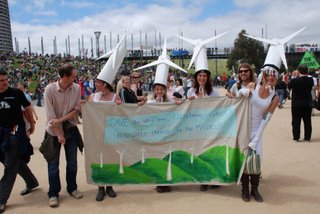 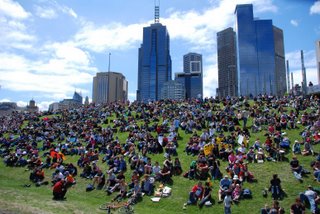 The crowd on the hill 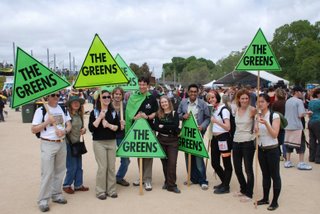 The Greens were the only political party evident. 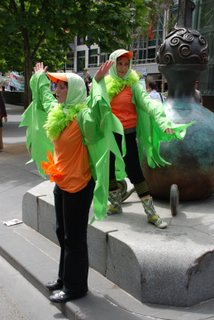 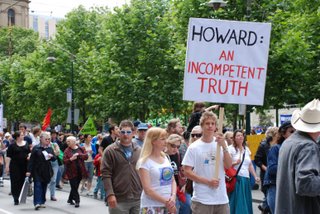 John Howard rated a mention - for the wrong reasons. 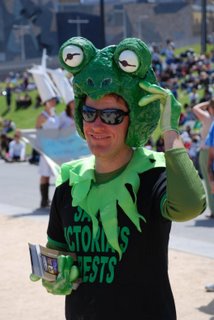 A Baw Baw tree frog.
Posted by Peter Campbell at 2:26 pm No comments: