Letter to my local member Petro Georgiou on climate change

I just sent this letter to Petro Georgiou, my local member in the Kooyong electorate.

I write to you as a constituent. Thanks for your letter dated 16 May advising of budget matters and the Government's platform for the 2007 election.

I believe that climate change is the number one issue facing Australia and Kooyong at present. I don't think the Government and budget initiatives you mention under "The Environment" are anywhere near enough to address climate change.

For example, nearly all the total $500m Low Emissions Technology Demonstration fund is committed to carbon capture and sequestration research and development. You incorrectly refer to this as "clean coal". There is no such thing, burning coal will always result in carbon emissions. This technology is unproven, and will in any case will not be available in time to address the major cutbacks immediately required in carbon emissions - as identified in the Stern report and recent IPCC reports.

Both these reports indicate that significant expenditure (about 1% of GDP) is required to limit further global temperature rises by one degree. The cost of doing nothing effective now could require over 3-5% of GDP to address later (say in 5 years time).

At local level, can you please:

Could you please convey my views to the Australian parliament and the Liberal Party room for consideration and action?

I await your response. I will follow this email up with a phone call next week to confirm progress on this. I would also like to meet with you to discuss these matters further.

Posted by Peter Campbell at 12:07 am No comments:

It is interesting to observe the serious lack of real political commitment from Labor, Liberal and Family First parties to seriously address climate change.

On 10 May 2007, Senator Christine Milne (Greens Senator for Tasmania) moved that the Senate:

(a) notes that most industrialised nations now accept the imperative of constraining global temperature increase to 2 degrees or less to avoid catastrophic climate change; and

(b) agrees that the imperative of constraining global temperature increase to no more than 2 degrees above pre-industrial levels should underpin government policy responses to global warming.

7 Senators (Greens and Democrats) voted for the motion, while 44 voted against it.

Labor, the Liberals and Family First all voted against it.

The science is clear, and the catastrophic results are increasingly apparent, with yet another Government report about to be released with shocking findings, including major risks to some of our most basic services and necessities - including water, electricity, transport, telecommunications and buildings. Melbourne has just experienced its driest ever year, getting only half its yearly average rainfall as of 15 May 2007.

Unfortunately, most of our politicians are prepared to play games and fiddle while Australia burns.

I bumped into Bob Hawke in Melbourne airport just after the 2004 federal election, and asked him what on earth happened with Mark Latham and Labor's strategy for the election. He replied that Latham had earlier sought advice from him and he told him that

“you need to take a lead position on your key strengths and you need to cover the key issues that your opponents will use against you”.

I consider this sage advice.

In 2004, Labor arguably ran on education (e.g. school funding) and health (e.g. Medicare Gold). The Howard governed countered them on education by running a scare campaign on funding for non-government schools being reduced (as per their “hit list”).

The environment has been a differentiator between Labor and the Liberals, but in 2004 Latham played a game of cat and mouse on forests with John Howard. Instead of taking a leadership position on forest protection and taking it up to Howard, Latham was lured into a trap which was deftly sprung when John Howard visited Tasmania and famously hugged members of the CFMEU in Hobart. Labor's Tony O'Connor of the CFMEU denounced Labor's forest policy in favour of John Howard's. While this did not actually cost Labor the election, it certainly did not help them much.

Interestingly, Hawke also pointed out that one of Howard's former key strengths – national security – was effectively neutralised as a campaign issue for him when the “43 eminent people” including retired defence chiefs, diplomats and former senior bureaucrats strongly criticised Howard for deceiving the Australian people over the Iraq war and pointing out that Australia had not become a safer place as a result of the war. However, Labor was not able to capitalise on this, although they did ask a series of questions in Parliament on this topic. See PM shrugs off foreign policy attack for more information on this.

Latham's earlier wins on policy issues like books for children in schools and reducing parliamentarians superannuation disappeared in the cut and thrust of the campaign and the ensuing media storm.

So what will the strategies for the major parties be for the 2007 Federal election? Here is my take on it.

Labor will run on:

Climate change and the environment

Labor will seek to mitigate Liberal attacks on:

The Liberals will run on:

Other items significant for the election in Costello's budget include:


The Liberals will seek to mitigate Labor attacks on:

Where I think both major parties will fail:

So what about the Greens?

This is topic for a separate posting. Some of the above points where major parties may fail could be addressed by them. They will be under strident attack from both Labor and The Liberals who are not keen to lose any votes to newcomers or to share the balance of power with other parties.

Will the Greens be able to counter attacks by the major parties and consolidate growing public support for many of their core policies which have now become mainstream? Or will they be marginalised and characterised again as “extreme”? Will Labor and Liberal really take action on climate change, or will they succeed in just greenwashing themselves?

Stay tuned.
Posted by Peter Campbell at 10:46 am No comments:

Time for action on water, not more reviews

It is a great concern that Melbourne's water storages have just dropped below 30% for only the second time since the severe 1967 drought.

Looking at Melbourne Water's information on our reservoirs and consumption, we have about 320 days of water until we get to 10% levels if we continue to consume water at our current rate. 10% could be a realistic minimum amount as it could be problematic to get access to or use remaining water below this level. If no significant rain falls, Melbourne will effectively run out of water by March 2008.

Yet with an apparent crisis looming, there is scant provision to address our water shortage in the Victorian State budget just announced by Treasurer John Brumby, despite windfall income from gambling revenue.

The best that Minister Thwaites can tell us is that the Government is still “looking at options”. It is time for action, not more reviews.

Two possible options for managing and conserving our water are:

At this point in time, there are no significant financial incentives for those who do the right thing and install large water tanks, and people are still topping up domestic swimming pools that lose a lot of water every day due to evaporation.

A family of four can normally get by with about 25,000 litres of water storage. Most domestic swimming pools contain significantly more water than this – up to 50,000 litres is not uncommon.

Perhaps it is time that domestic pools are converted for water storage purposes rather than used for recreation.

Some real action on and funding for addressing the causes of climate change such as reducing our huge greenhouse gas emissions could also help address the causes of the drought.

Note: an edited version of this letter was published in The Australian on Saturday 5 May, 2007

When we completed our sustainable house renovation in 2001 we had about 8 light globes that were on dimmer switches in two of our main living spaces. At the time, compact fluorescent light bulbs would not operate on dimmers, or you needed a special very expensive dimmer switch. We also had some wall lighting that used small bulbs. We have been running high electrical consumption incandescent bulbs in all these areas, which has bothered me for some time.

Happily, a much larger variety of compact fluorescent are now available.

Today, I visted The Environment Shop in Northcote and bought the following globes: 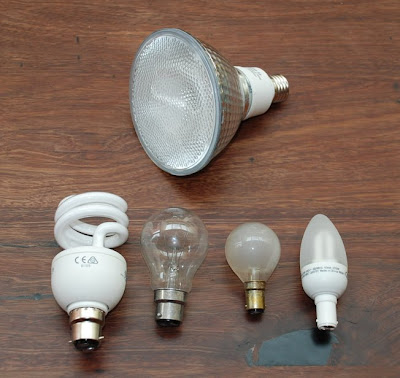 This will dramatically reduce our energy consumption - next I will calculate by how much.

I also plan to install more panels to our solar array. Adding about four 150w panels will hopefully make us net generators of electricity and further contribute to us reducing greenhouse gas emissions.
Posted by Peter Campbell at 2:01 pm No comments: