The long running federal election campaign is coming to an end.  Most of the action has been in marginal seats in New South Wales and Queensland where cash gets splashed and promises are made.

A safe Liberal seat like Kooyong becomes a bit of backwater.  However, this election the Australian Conservation Foundation and The Wilderness Society have mobilised community volunteers to door knock through the electorate and ask people to pledge they will vote for a candidate who commits to:


Party candidates in Kooyong were asked to make the same pledge. Margaret D'Arcy (Labor) and Helen McLeod (Greens) both did, but Josh Frydenberg (Liberal, incumbent) did not.

Over 1000 people in the electorate did make the pledge.

I did some door knocking on Saturday 25 July in August with about a dozen other volunteers. I had many good conversations with voters and over 100 pledges.  One person said they couldn't pledge as they voted Liberal. When I told him that the pledge was apolitical he said he would and asked me why Josh wouldn't.  I said he would have to ask Josh about that.

I handed out copies of the scorecard (which is not a how to vote card) at the early voting (pre poll) centre in Riversdale Road. 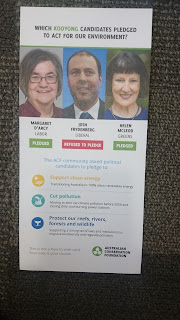 Josh was there with his "blue army" of around 8 helpers in blue shirts.

Helen McLeod, Margaret D'Arcy and Angelina Zubic (independent) were there too.

Josh said he wasn't happy about the leaflet, even though I clarified it (and the pledge) was produced by ACF and TWS.  He said he wasn't happy with the "pledge truck" that has been around in Kooyong, so the Liberals have responded with their truck (attacking the Greens, but no mention of Liberal except in unreadable fine print).

However, Josh did say he was interested in helping get the Hawthorn to Box Hill bike trail built so I will catch up with him after the election - he is likely to be elected - to discuss how we can make some progress.

It will be interesting to see how community-based door knocking and the pledge in Kooyong will affect the outcome.  A good comparison will be Goldstein, which has a similar strong Greens vote but there was no activity with the pledge.

Kooyong is still among the top 25 green electorates in the country and the vote is growing:
Josh Frydenberg responded to this environmental focus by distributing a leaflet to the entire electorate spruiking his environmental credentials.

It is very clear that we need to transition of coal and other fossil fuels over the next 10 years to 100% renewable energy if we are to have any chance of retaining a safe climate.

The Liberal-National minority government are stuck in denial of climate change; their "Direct Action" policies are ineffective and emissions have risen since Tony Abbott scrapped the effective carbon tax - this was his greatest blunder and an act of sheer vandalism.

The Labor party's climate and energy policies, while better than the LNP, are still nowhere near good enough.

The Greens still have the strongest environmental policies, and they are the only ones to mention forest protecting during this election campaign.  If the Greens win Batman (possible) and Higgins (not so likely) in Victoria and a couple of others elsewhere they may have the numbers to form government with Labor.  Labor has churlishly ruled this out, but would they really force us to go to another general election?

It will be interesting to see what the voters of Kooyong and across Australia do.

Posted by Peter Campbell at 12:08 am 3 comments: Links to this post

Please introduce a permanent ban on unconventional gas in Victoria

My name is Peter Campbell, I am an IT consultant and live in Surrey Hills.  I am writing to you to urge you to stand with the community and permanently ban onshore gas drilling.

The community has reached consensus. 73 communities have declared themselves 'Gasfield Free' , with an overwhelming majority pledging they will do whatever it takes to stop onshore gas drilling going ahead.

Onshore gasfields have inherent risks that we will not tolerate.  Water contamination, air pollution and industrialisation threaten rural communities, the health of people and animals, our environment and local economies.

I hope the Andrews Labor Government will stand on the side of the community.

Renewable energy must be implemented to replace fossil fuel usage for electricity, heating and transport.

Posted by Peter Campbell at 9:55 am No comments: Links to this post