I submitted my DNA for to the National Geographic Geno 2 project for testing.  This is a new test, upgraded from the original Human Genome test.

Here is my maternal ancestral migration route out of Africa.  Interestingly, I have some close maternal DNA matches (recent ancestry) in Norway. Whether they arrived there via the historical migration shown below, or whether they came from Great Britain is not known. 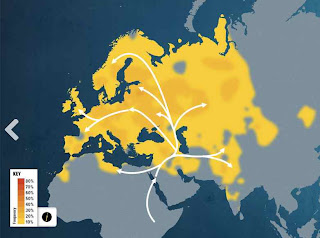 Here is my paternal ancestral migration route out of Africa.  They traveled a long way across into central asia before heading north on then west on their way to Great Britain. 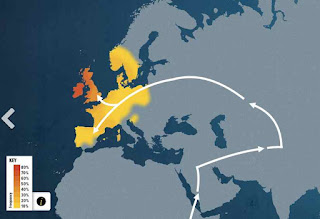 My overall results are:
The Northern European component of my ancestry is found at highest frequency in northern European populations—people from the UK, Denmark, Finland, Russia and Germany in our reference populations. While not limited to these groups, it is found at lower frequencies throughout the rest of Europe. This component is likely the signal of the earliest hunter-gatherer inhabitants of Europe, who were the last to make the transition to agriculture as it moved in from the Middle East during the Neolithic period around 8,000 years ago.

This Mediterranean component of my ancestry is found at highest frequencies in southern Europe and the Levant—people from Sardinia, Italy, Greece, Lebanon, Egypt and Tunisia in our reference populations. While not limited to these groups, it is found at lower frequencies throughout the rest of Europe, the Middle East, Central and South Asia. This component is likely the signal of the Neolithic population expansion from the Middle East, beginning around 8,000 years ago, likely from the western part of the Fertile Crescent.

The Southwest Asian component of my ancestry is found at highest frequencies in India and neighboring populations, including Tajikistan and Iran in our reference dataset. It is also found at lower frequencies in Europe and North Africa. As with the Mediterranean component, it was likely spread during the Neolithic expansion, perhaps from the eastern part of the Fertile Crescent. Individuals with heavy European influence in their ancestry will show traces of this because all Europeans have mixed with people from Southwest Asia over tens of thousands of years.


Reference populations
Hominid ancestry
When our ancestors first migrated out of Africa around 60,000 years ago, they were not alone. At that time, at least two other species of hominid cousins walked the Eurasian landmass: Neanderthals and Denisovans. Most non-Africans are about 2% Neanderthal. The Denisovan component of my Geno 2.0 results is more experimental.