A subway system for Melbourne and less secretive planning

Melbourne urgently needs improvements to its train network to make the city more efficient and liveable. The current radial network was laid out in the 1890s and has served Melbourne well, but no new lines have been built in Melbourne this century with the exception of the city loop. Over this period the Kew branch line and the Outer Circle railway have been closed, and others such as St Kilda have been replaced by light rail services. Melbourne's rail network is now smaller than it was in 1930.

Visiting European cities such as London, Paris and Naples, it is apparent that their subway systems work well to improve transport, particularly in and around the city centres. Melbourne could have a similar subway system that connects the busy regions of South Yarra, South Melbourne, Brunswick, North Fitzroy, North Melbourne, Docklands and Richmond. Travelling to these areas by either tram (or train if there is one) can take up to 30 minutes from central Melbourne. These trips would take about 10 minutes on an efficient subway system.

We need a transparent planning process with public consultation to address opportunities for developing the rail network, rather than the secretive and confidential processes of the Bracks government. For example, Operational Double Fault, the proposal to put sections of the Glen Waverley line underground, appears to be driven by commercial opportunties to develop the real estate that would be created above it. Confidential briefings to the premier and behind the scenes lobbying by commercial interests may not address the concerns of Melbourne residents and rail users, or deliver significant improvements to rail services.

The government only allocated a paltry $61.8 million in the 2006-07 State budget for funding rail services on existing tracks and planning for more services in the future out of total expenditure of 2.6 billion for transport related infrastructure. There are no new rail services planned for Melbourne's growing outer suburbs - the Government only plans to provide bus services to them.

To seriously address issues like climate change and pollution, significantly more investment in rail infrastructure and services is required. A new subway system could cost up to $2 to 3 billion, but the social, enviromental and economic benefits would be huge. It is time that Victorians had some say in such important matters for our future.

I spent most of Saturday 3rd March at Surrey Hills festival which was held in the railway station carpark. The Lighter Footprints local climate change action group had an information stall there which was well visited. I have just joined the group, which formed in late 2006 and is based in and around (but not restricted to) Surrey Hills.

There was lots of interest from passers by, with many people expressing interest in having an energy audit in their home and participating in an upcoming tour of a local sustainable house (our house).

It is very encouraging that community awareness about and action on climate change has grown rapidly. Local action groups have also formed in Hawthorn, Kew, Ashburton and Bayside. 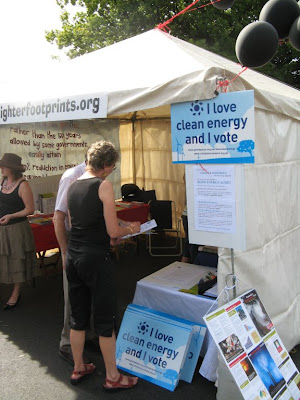 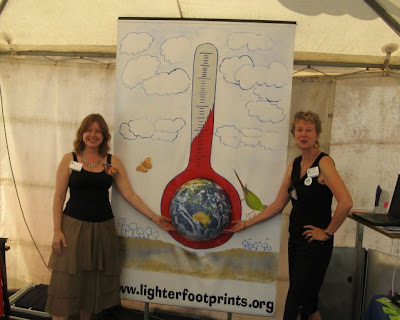 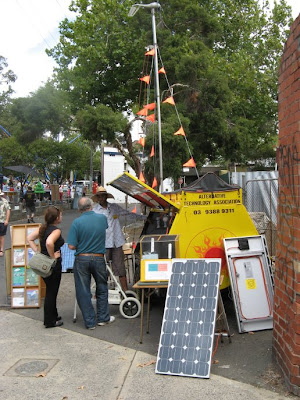 The Alternative Technology Association was there too.

It is time that "alternative technology" and renewable energy became the norm, with roadmaps in place for exiting non-renewable energy such as fossil fuels. Nuclear energy is not renewable either, so it is not a good long term option. 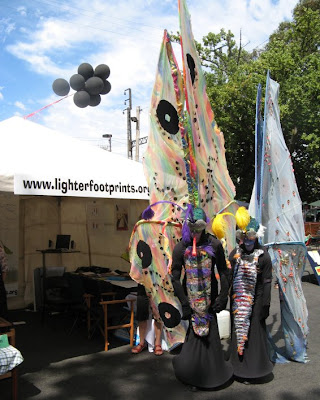 A pair of impressive butterflies dropped by to lend their support 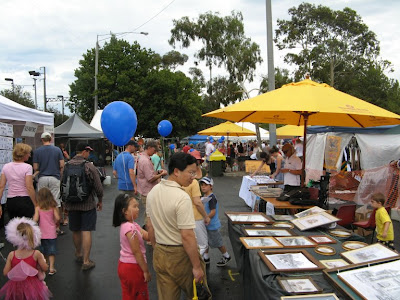 The festival was well attended 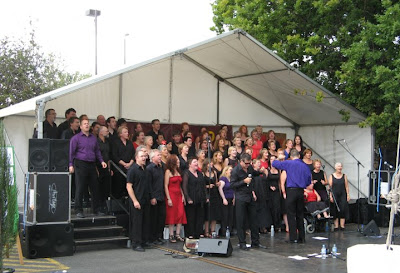 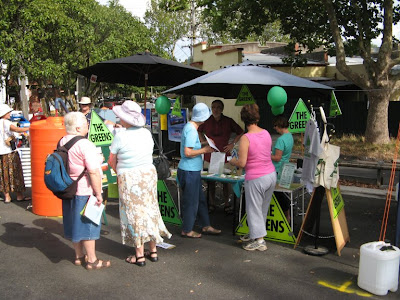 The Greens and a water tank seller were close by too. 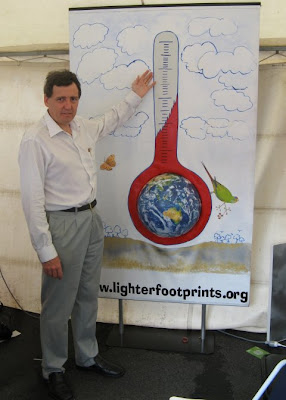 Several local politicians stopped by for a chat and were very interested. Robert Clark (above), the member for Box Hill is pointing to an aggressive target. Bob Stensholt (member for Burwood) and Dick Menting (Boroondara Councillor) also expressed their support.

The growing community desire for real action on climate change and sustainability is resulting in some great local intiatives, discussions and information sharing about what we can all do to turn the situation around.
Posted by Peter Campbell at 11:56 pm No comments: Links to this post