Extreme weather was the main cause of Black Saturday bushfires

I attended a seminar on April 21, 2009 about the catastrophic bushfires in Victoria on Black Saturday. The seminar was organised by the Melbourne School of Land and Environment at Melbourne University.

The speakers and topics were:

These talks shed some light on the scientific observations about recent bushfires on February 7 2009 in Victoria and the reasons why they were so severe.

Professor David Karoly stressed that the extreme weather parameters on and leading up to February 7 were the most important factor, including:
The strong north winds and the southerly wind change on February 7th were not unusual in themselves, but combined with the above factors, and ignition of the fires, the results were catastrophic.

Bushfire index ratings compared between extreme fires are:
Professor Karoly also pointed out that CSIRO scientific predictions are that the current rate of climate change were are experiencing will result in 4 times as many extreme fire dangers days like Black Saturday each year by 2050.

He concluded with these observations:
Dr Kevin Tolhurst provided some scientific research results on the spread and intensity of fires. The scale of these fires has not been modelled to date, and factors such as extreme convection columns have not been studied or modelled to date.

In summary, Kevin stated that:
The forum concluded with a moderated general discussion of the science of bushfires.

I pointed out that many fires active on Black Saturday such as the Bunyip fire burnt large areas of farmland as well as forest areas (two thirds of the Bunyip fire was cleared farmland), and asked whether recent commentary in the media about fuel loads being the major cause of the fires, particularly in forest areas, was correct.

Kevin stated that the extreme weather dominated the fire behaviour rather than fuel loads which played a lesser role. As an example, he mentioned the Lara bushfire on grass paddocks on 8 January 1969 along the Geelong Road that killed 17 people trapped in their cars. In total, 280 fires broke out on the 8th of January 1969. Of these, 12 grass fires reached major proportions and burnt 250,000 hectares. The fires also destroyed 230 houses, 21 other buildings and more than 12,000 stock.

For also stated that less extreme fires, fuel loads can play a greater role in contributing to the extent and heat of the fire.

There was also a question from a member of the "Stretton Group" as to why fuel reduction burning similar to that conducted in Western Australia is not done in Victoria.

Kevin responded that the weather systems, forest types, and flora and fauna impacts are different between WA and Victoria, so the WA burning regime is not directly comparable or relevant to conditions in Victoria.

Around 100,000 hectares of forest has now been burnt twice in succession in 2003 and 2006/7, which has killed the large areas of Mountain Ash forest and the seed for these trees, which cannot now regenerate.

So climate change is contributing to the frequency and severity of bushfires, which are now destroying wet forest that would previously have acted as a natural fire breaks. As theses wetter forests are not adapted for burining, they will now largely replaced with dry schlerophyl forest which is more prone to burning in the future. Increased fuel reduction burning, as advocated by some sectors of the forest industy and associated lobby groups, would further exacerbate this situation.

It is clear that we need to make decisions about land and forest management and bushfire management based on firm scientific evidence rather than pressure from ill informed lobby groups. 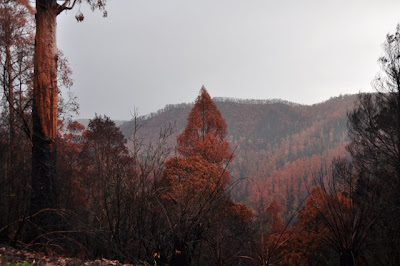 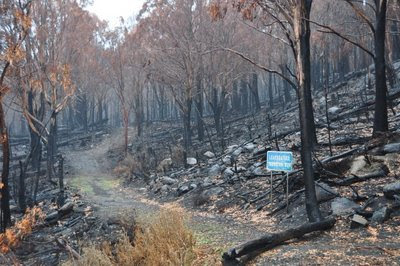 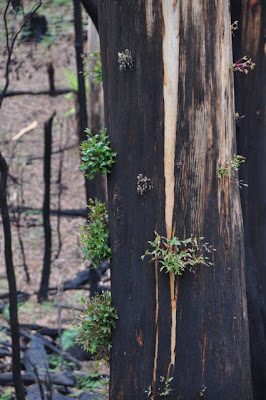 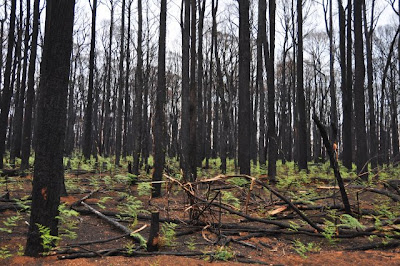 Thanks Peter - a valuable update.

Very useful account. Could I get high res copies of pics for VNPA magazine pls? michaelh@vnpa.org.au