A better solution for water

Here is a copy of our domestic water bill for 2 February 2010. 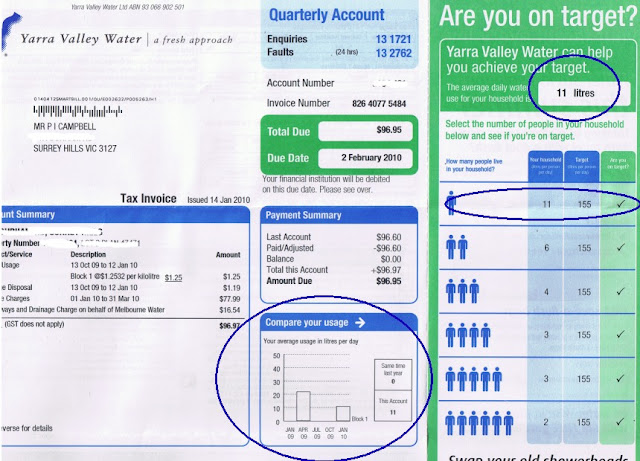 We have 23,000 litres of water tanks in Surrey Hills and are almost completely self-sufficient for water - as you can see by the information on this bill, including:


Yet the Victorian Minister Tim Holding has stated that "water tanks are not an effective solution" and Premier John Brumby as stated that "water tanks would have higher carbon emissions than the desalination plant".
Neither have responded to my letters informing them that they are wrong on both counts - despite me providing evidence that proves my point.
The Brumby government panicked during 2008-2009 when the drought was severe, and threw 10 years of water strategy and community consultation focused on recycling water and conserving it in the bin.
Instead the Brumby government has:
There was no community consultation about either project and the huge environmental impacts of both have been basically ignored. "Parliamentary rule" from Spring Street is not democracy - its dodgy business deals that deliver really bad outcomes that we all have to end up paying for decades to come.
If the government had commissioned recycling and storm water capture instead, we could have avoided the expense and environmental impacts of both these projects.
Links
Posted by Peter Campbell at 12:03 am 3 comments: Links to this post

An historic deal that will end logging of Tasmania's native forests was reported today.

Following lengthy talks between industry, union and environment groups, an agreement between them has just been struck, and a joint statement of principles issued, that includes:


This is great news for Tasmania's remaining native forests, and potentially ends decades of conflict over the logging of native forests.
It is interesting to note that no politicians were involved in brokering the agreement.  Forests have been a "political football" for some time, with both Labor and Liberal governments supporting their ongoing destruction for decades and ignoring the wishes of over 80% of the Australian population that want them protected.
There are many factors that have contributed to this outcome, including:
This follows the end of industrial-scale native forest logging in Queensland and Western Australia in the late 90s.
This agreement clearly sets a precedent for exiting native forest logging in Victoria and New South Wales too, where factors very similar to those in Tasmania are also relevant.
It is to be hoped that industry, union and environment groups in New South Wales and Victoria can achieve a similar excellent outcome after years of similar conflict and declining jobs in the native forest logging sector.
Forest protection is big issue in the upcoming 2010 Victorian State election.  The Brumby government protected around 41,000 hectares of forest in September 2010, but this included many areas that were not high conservation-value forests (only around 11,000 hectare were old growth forests), and left many other high quality forest areas such as Brown Mountain unprotected from logging.
A compromised political outcome that only protects Melbourne's water catchments (less than 2% of Victoria's native forests logged annually) - will not be good enough.
Links 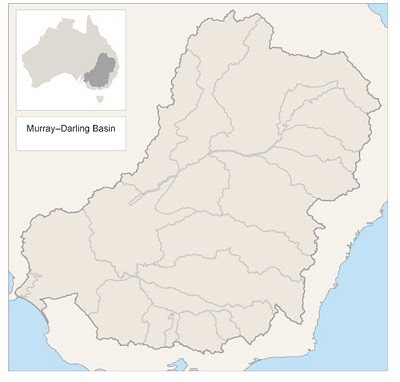 We have recently seen the Murray Darling river system - Australia's greatest river system - drastically affected by reduced water flow due to the combined effects of climate change and irrigation from the river.

For several years the Murray River stopped flowing into the sea.  Barrages (like dams) are in place to stop seawater  moving backup through the lower lakes and river systems, including the wonderful Coorong.  If saltwater were to do this, the freshwater ecology of these parts of the system would be greatly damaged.

The drought that lasted over 10 years exceeded all wort-case estimates by climatologists and weather experts.  It has been broken in 2010, but the underlying causes for it have not gone away, and this cycle could be repeated within the next decade.

The drought drastically reduced water flows.  Many farmers with water allocations ("rights") along the river simply could not get their water.  Orchards, vineyards and dairies relying on water from the river had to shut down or close, and many commercial trees and agricultural crops died.

There is no point having water rights if there is no water.

The Wentworth Group of Scientists warned of this scenario over a decade ago, but their warnings and recommendations were ignored by governments and policy makers.  There has been much talk about "doing something" to restore desperately needed environmental flows to the river system, but very little effective action to date.

The Murray–Darling Basin Authority (MDBA) has now commenced community engagement about actions and recommendations to restore environmental flows the river system.  They have released the a Guide to the Basin Plan document.

Some of the proposal and information on the guide include:
The guide details possible water reductions required in numerous regions within the basin.  This has generated major concern within rural communities within many regions, who fear that reduced water allocations will have drastic financial impacts on agricultural producers and the local economy and towns they support.

This will certainly be the case - but similar impacts have occurred, and will occur again, when water in the river system becomes scarce again.

There have been loud and irrational outbursts at public consultation and meeting and directed and the Federal Government , the Water Minister and numerous other members of parliament.
It is worth noting that so far only a guide to the plan has been release, not any binding plan or commitments.  This is being misrepresented by emotive claims by some rural commentators - and federal politicians such as Senator Barnaby Joyce - that "this plan (sic) will lead to the decimation of rural agriculture and country towns".  This is not consultation or a debate - this is a beat up.
Cotton, rice and vineyards all produce crops and products that require vast amounts of water (more information).  Ditto for dairies. I think it is clear that this type of production should happen in regions that have sufficient available rainfall, rather than chronically depleting a river system.
It is not hard to see why there has been no effective action on restoring environmental flows in this river system to date.  Any attempts to do so are met with a barrage of emotion and accusations, which in the past have  lead to major water reforms being shelved.
It is to be hoped that the current water reform process doesn't suffer the same fate.  Otherwise the next severe drought will cause decimation of rural agriculture and country towns along with like death of much of the ecology of the river system.
The new parliamentary committee for regional Australia, chaired by independent MP Tony Windsor whose electorate will be affected by the plan, appears  likely head up a parliamentary inquiry into the social and economic effects of the proposed cuts.  Let's hope he acts in the best interests of all Australians in doing so.
External links
This post is part of Blog Action Day: blogactionday.change.org


Petitions by Change.org|Start a Petition »
Posted by Peter Campbell at 12:39 pm 3 comments: Links to this post