GM for Victoria is a travesty of democracy 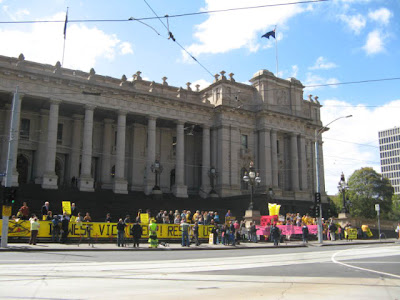 The Brumby government removed the GM moratorium that was in place in Victoria for the last five years. I attended a vocal protest on the steps of the Victorian parliament on Thursday 28 February 2002 that raised community concerns about:
GM giant corporations such as Bayer and Monsanto will benefit from this Brumby government policy while ordinary Victorians do not support it.

I call on John Brumby to release information on how many submissions and letters the government received supporting GM canola compared to those who opposed it. The Brumby governemnt should be governing for Victorians, not global companies and agribusiness interests.

The rally speakers included:
Politicians present were Tammy Lobato (Labor MP), Greg Barber and Sue Pennicuik from the Greens and Peter Kavanagh from the DLP. Greg Barber addressed the crowd. 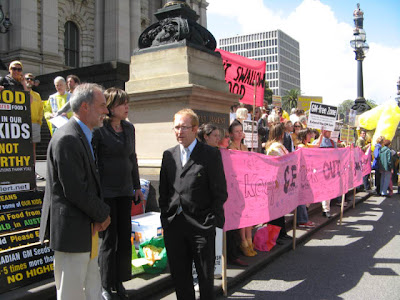 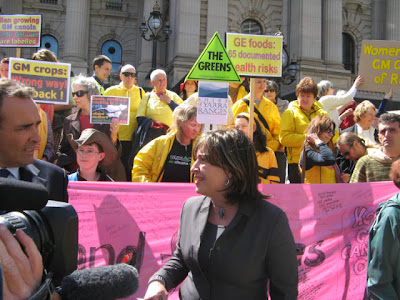 Tammy Lobato MP at the protest
It was encouraging to hear such a broad range of speakers oppose the introduction of GM canola and the lifting of the GM moratorium in Victoria, and incredibly dissappointing that the Brumby government has chosen to do this.
Posted by Peter Campbell at 12:28 pm No comments: Links to this post

I am sorry for the hardship and suffering inflicted upon the stolen generation of indigenous Australians.

Kevin Rudd's speech and motion in parliament today was inspiring and long overdue. I strongly endorse his speech and approach towards both saying sorry to the stolen generation and taking real bipartisan action towards addressing the ongoing problems facing indigenous Australians.

We need to cease paternalistic interventions and work together towards real and lasting solutions and improvements.

We have said sorry and acknowledged the hurt and suffering of the stolen generation and those others so deeply affected by them being taken. Now it is time to move forward, set real goals and and take some real cooperative action to close the gaps between indigenous and other Australians.
Posted by Peter Campbell at 11:44 am 1 comment: Links to this post