Premier John Brumby and the Victorian Labor government has just approved a new coal fired power station to be build by a Chinese company in the Latrobe Valley.

More carbon emissions will obviously result - despite claims that it is somehow "clean".

We should only be building solar thermal power stations with molten salt energy storage, and wind farms.

Update 17 September 2010
Marius Kloppers, the CEO of BHP, today called for Australia to bring in a carbon tax to put a price on carbon and to plan for a transition off coal [link]

In California, the world's largest solar power station has just been given approval to proceed.  It will cost US$6b  and provide 1000 MW of power. [link]

Posted by Peter Campbell at 1:19 am 7 comments: Links to this post

Nationals go feral and a disgruntled Opposition and media

After hearing nothing from the National Party during the election, we have been treated to the unedifying spectacle of Barnaby Joyce and Warren Truss launching strident and savage attacks against the two independent MPs who decided to support Labor in a minority government.  This behaviour is quite inappropriate and demonstrates the worst of "politics as usual" by MPs who should know better.

Tony Abbott, to his credit, has attempted to reign them in but has not been able to do so.  So much for a "stable opposition".  We have also seen attacks on the minority government by Joe Hockey and Christopher Pyne, who labelled it as "illegitimate".   This was also inappropriate and was just more attack-dog style politics.

We also see the Coalition (all 74 of them) now committed to more whining and carping and incessant criticism of the minority government.  Imagine trying to run a company where 49% of the workers were sitting back and doing nothing other than finding fault, often for no good reason, with the other 51% working for the good of the company!   There is certainly no new paradigm being displayed here.

The response from large sections of the media is also curious.  Some seem outraged by the lack of a "winner takes all" result and subsequent autocratic behaviour of a particular political party.

As many observers have noted, minority government and power sharing arrangements are the norm in most modern democracies.  There is nothing wrong with this, and there are several advantages as we have already seen - such as better decision making, getting a wider range of issues considered by government and parliamentary reform to improve its function to name a few.

I was impressed by Tony Windsor's and Rob Oakeshott's short speeches when they announced their decision.  They made several excellent points and also provided a clear and considered basis for their decision to support a minority government with Labor, the Greens Adam Bandt and Andrew Wilkie.

Bob Katter had his moment in the sun and predictably swayed in the conservative direction of his constituents in Far North Queensland to support Tony Abbott and the Coalition.   Even though he displayes a visceral hate for a couple of the current national party members.  But then he knew they were not going to form government.

Some other points of interest are:


Hopefully we will see a rejuvenated political system with less gumpf from the mainstream media and opposition, and we will at last see some positive steps to the future, including steps to transition to a clean and safe energy future.
Posted by Peter Campbell at 12:35 am 2 comments: Links to this post

Gunns exits native forests, they should now be protected in Tasmania, NSW and Victoria

Gunns has exited from logging native forests in Tasmania, and have stated that "native forest is not part of our future" and that they are moving to a plantation-based business.

Gunns acknowledged that the vast majority of Australians want their native forests protected.

However, Tasmanian native forests, and native forests in Victoria and New South Wales, are not protected from logging as a result of this. 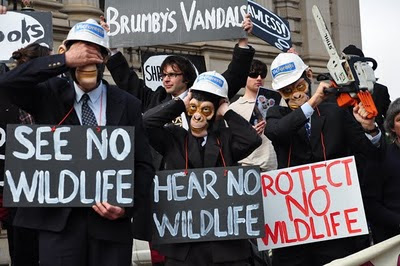 Three wise monkeys at the Brown Mountain rally at the Victorian Parliament
The Victorian Labor government promised in 2006 to "immediately protect remaining significant stands of old growth forest currently available for timber harvesting" but they have not yet done so.

The 40,000 hectares of "forest" they did commit to protect included low quality regrowth forest and even some cow paddocks.  They did not protect other designated old growth forests such as Brown Mountain.

Following legal action by Environment East Gippsland, the Victorian Supreme Court ruled that Brown Mountain forest must be protected due to the presence of endangered species and the requirements of the law, and found the Victorian Government and Vicforests to be at fault.

It is now up to state and federal governments to recognised the will of the people and ensure that remaining native forests are protected and that the logging and woodchip industries fully transition to plantation resources.

The very significant benefits in protecting our remaining native forests include preserving their biodiversity, safeguarding the carbon they store and the water they produce, and providing an excellent resource for local and international eco-tourism.

Posted by Peter Campbell at 12:11 pm 2 comments: Links to this post

A well hung parliament is healthy for Australia

Negotiations are proceeding to form a stable government in Australia, with neither of the "major" (or "old") parties getting enough seats in the House of Representatives to form government on their own.  The magic number is 76 seats.

Currently the Liberal - National coalition have won 73, which includes a National MP in Western Australia who has not yet fully committed to supporting the Coalition.

Labor have won 72 seats.  The Greens had previously committed to supporting a minority Labor goverment [link], bring Labor's total to 73.

Andrew Wilkie, the indepedent who has just won the seat of Denison in Tasmania, committed to supporting a Labor minority government today [link].  Wilkie's commitment boosts Labor to 74.

There are three remaining independents yet to decide who they will support.

Tony Windsor and Rob Oakeshott appear to share similar views on matters of policy and the conduct of government.  The recent revelation of serious errors in Coalition budget estimates and promised found by Treasury means they are either incompetent or liars, which does not auger well for a future Abbott government.

Both Windsor and Oakeshott have stated that a price on carbon is needed as one of the measures to tackle climate change [link].  Abbott ruled this out during the election campaign and stated his government would not bring in either a carbon tax or an emissions trading scheme.

For these reasons (and a few more), I think Windsor and Oakeshott will support Labor too, which would give Labor 76 seats.

Bob Katter comes across as a rough diamond passionate about protecting the interests of rural Australia.  There is no doubt that services and economic conditions in much of rural Australia have been neglected by political parties (and governments) intent on winning elections focussed on marginal seats.  Katter was quoted today saying the "Nicholas Stern and Ross Garnaut are lightweights" along with some mutterings about climate change [link] - which seems to indicate he is the camp of politicians gulled by carbon industry PR.

Katter's background and the views of voters in his electorate would seem to push him towards supporting Abbott, but he may go along with his other two independent colleagues and support Labor too.

We should know by the end of this weekend coming.

The hung parliament has been the best possible result for the election, as our political system was being gamed by the major parties leading to many perverse policies, including unfair treatment of asylum seekers, avoidance of any real action on climate change to name a couple.

The benefits of this hung parliament are already clear.  They include:
All these are in the best interests of good governance and the people of Australia.
Posted by Peter Campbell at 9:51 pm 2 comments: Links to this post